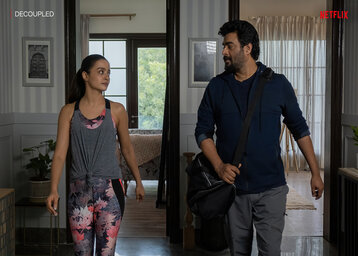 As we all know, that Indian web series has turned the tables in the last 5-6 years, and they are giving amazing content. The digital platform is getting more vibrant every day. The online OTT platforms like Amazon Prime, Netflix, Disney+Hotstar, Zee5, MX Player, and more come with great content via web series, movies, documentaries, etc.

Web series like The Family Man, Scam 1992, Mirzapur, and more raise the Hindi web series on a very new level. Every month comes with new web series, movies, and with new talents on screens. Here, we are sharing with you the top upcoming web series in May 2021. Get the complete details about them from the release date, cast, director, and more. Here is the list of upcoming Indian web series in May 2021. Also, check out the How to watch Broken but Beautiful season 3 for free by clicking here.

Review of Upcoming Latest Web Series in May 2021

This web series will star Tamannaah Bhatia in the lead role which is going to release on 20th May 2021. The trailer of this web series comes in Tamil with seven episodes that follow the events that unfold in the aftermath of a murder.

This web series is made in Tamil and Hindi and this November Story is a classic murder mystery where the quest to find the truth behind the crime evils a series of hidden truths. All of the actors have delivered extraordinary performances and this one has a unique theme and genre. This Indian web series is coming on Disney+Hotstar.

After the long wait, now we have the release date and trailer for the Broken but Beautiful season 3. The Big Boss 13 winner Sidharth Shukla has been introduced as an angry young man of the Hindi theater. The actor shared the tailor via his social media account and wrote “ Sometimes, Falling out of love can be more empowering than Falling in Love”.

It is all about the no-strings-attached relationship but soon the cupid strikes them which takes them on the ride of full twists and turns. The trailer shows a glimpse of fiery love and hates relationships. This web series is now Streaming in May 2021

Streaming on: ALTBalaji and zee5

The OTT industry is booming, and the Famous Kunal Kholi is ready with his next web series as he took his social media account to announce the web series titles Ramyug. This upcoming web series will feature the new Hanuman Chalisa, which Amitabh Bachchan sings. Kunal Kholi will direct this MX Player web series.

Also, check out how to download the Ramyug Episodes online for free by clicking here.

Cast: Ajay Devgan and more yet to be disclosed. The second season of Jamtara is officially coming, and we are expecting the same in May 2021. The first season of the crime drama web series was released on January 10, 2020, and it had gained 7.3 IMDB ratings.

As per the post of Netflix on social media,” Our calls have been answered, and Jamtara will return for the second season with bigger scams. The first season was about Phishing. The cast has very talented names from Indian Digital entertainment. The expectation is higher from this Indian web series 2021.

5. Rudra- The Edge of Darkness Ajay Devgan is one of the leading superstars in the Bollywood industry, and he is all set to make his digital Debut on Hotstar by Rudra- the Edge of Darkness web series. This actor will be seen in an intense and gritty avatar. Ajay provides the information through his social media account and also the first look at the series.

It will be the biggest web series in India to date, and we are very excited to see the actor in a web series lead role. This is going to be the crime thriller of the year.

Cast: Ajay Devgan and more yet to be disclosed. The leading female actor Sonakshi Sinha is all set to make her digital debut with the untitled Amazon series. The very first look was released on International women's day. The actor will play the lead role as the cop, and the story shows that the women have no limit to what they can accomplish.

As per the actor”, she is very excited to collaborate with Amazon Prime and looks forward to bringing out the best Amazon Prime web series. The release date and further details are not disclosed yet, but we expect the same in May 2021. Karan Johar has announced 5 major projects in March 2021, and Finding Anamika is one of them. The famous Madhuri Dixit is all set to make her digital debut from it. This Netflix Indian web series will feature Sanjay Kapoor, Manav Kaul, Laksh Vir Saran, and more. It will be a suspense-based family drama about the global superstar and his wife when their mom suddenly goes missing. The Dhak Dhak girl has announced the same from her social media platform as she plays the role of Anamika Khanna.

The web series has no release date yet, but we are expecting the same in May 2021. Huma Qureshi is coming in the web series that is going to be released on Sonyliv. In the web series, she will play the CM of Bihar as the story seems to be inspired by what happened in Bihar in the 90s when Lalu Prasad Yadav made his homemaker wife Rabri Devi his successor.

The teaser for the same is out, and the people love it. Rani Bharti (Huma) is delighted to play. It is going to be the best Hindi web series with political drama. We are expecting that this web series is going to be released in May 2021. Anushka Sharma has recently announced her new Netflix series with Mai starring Sakshi Tanwar in the lead role. This web series is about what happens when a docile 47- year old wife and mother find herself accidentally sucked into a rabbit hole on violence and power.

Mai is the second web series produced by Clean Slate Films. The release date and teaser are still not released, but we are expecting the same this May 2021 as we all know that Netflix has a wide range of content in the form of movies, webseries, and more. It is one of the leading OTT platforms in the world. It is all about the troubled couple who are going through a tough time in their marriage. This web series is based on a couple from Gurugram and deals with a couple who are on the verge of separation but have to stay together for the sake of an 8-year-old child. No release date is yet announced, but we are expecting the same in May 2021.

R Madhavan and Surveen Chawla play the lead role in this Indian web series. It is coming on the Netflix platform. Think of the most dreaded villain! What if he has a daughter who truly, deeply, madly falls in love with you? What if you don't love her back? What if you are in love with someone else? How will you say no and get out of the situation? After all, quite like her father, she's not likely to take 'no' for an answer.

A romantic simpleton finds himself in the middle of this crossfire in Yeh Kaali Kaali Ankhein, a dark comical pulpy desi thriller about three things that matter the most in the country - paisa, taqat aur Pyaar!!! The first season of Out of love is all about betrayal, and seasons 2 is all about everything is fair in love and war. The famous actor Rasik Dugal will reprise their role as an estranged couple in the second season. The web series is set to release on 1st May 2021 on Disney+Hotstar VIP. This season is all about whether revenge is worth it or not.

As per Dugal, `` People deal with betrayal in different ways, and this season dives into the feeling of revenge. It is one of the best web series in Hindi that we are waiting for. This web series has an amazing star cast. This Indian Web Series will explore the story of a Shaman who joins a newly transferred cop to track down the mysterious killer. It has the stop stars like Sanjay Kapoor and more.

Also, check out how to watch The Last Hour web series for free by clicking here.

This is all about the upcoming web series in May 2021. These OTT platforms bring out the best talent with the best content in the market. Netflix is coming with more than 5 web series this year, and all are expected to be awesome.

We hope this information will help you choose the best one to watch when they are released.

Also, check out the upcoming web series in April 2021 by clicking here.

Earlier the web series was about to release in March, but now it is postponed till summer, and we are expecting it in May or June this year.

Q. How to get Disney+Hotstar Subscription for free?