How to Use Dhani Pay Card? 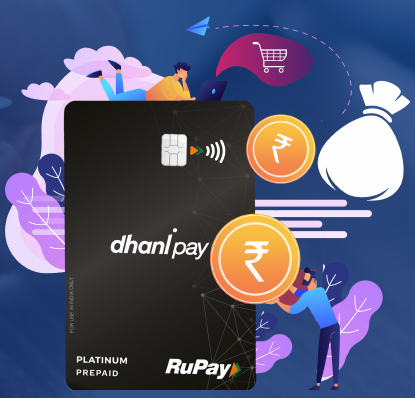 When it comes to online payments, certain tips and tricks can add to your savings. One such trick is to choose a payment mode that is most rewarding. So we have decided to come up with some articles in this series where you will get to know about different payment modes. Today, we cover how to use Dhani Pay card.

In the future, we will try to cover other payment modes as well. We will first start by introducing you to Dhani Card and its features. So scroll down to find all the details.

Earlier, we have also done a post on Dhani Super Saver Card, you can check out the post from here What is Dhani Pay Card?

Indiabulls Dhani is a fast-growing digital lending platform in the country. They have launched a Digital credit line to provide customers the option to shop anytime and pay later in installments.

It comes in digital and physical cards. The chip and pin cards can be easily managed using the Dhani app.

It is a prepaid card with wallet. Dhani Pay Platinum RuPay Card makes shopping easy and rewarding. The card is accepted at over 35+ lac merchants. Using the Dhani Credit line you can use it as a credit card. You can apply for the Dhani Pay card from the Dhani app.

Before you start using the Dhani Pay card, you need to activate it in the simple steps given below

Also Read: How To Transfer Dhani Cash To Bank Account

How to Activate Dhani Pay Card?

Now your Dhani Pay Card is activated. You can use it for online and offline transactions at over 3 million merchants. So let us check the steps to use Dhani Pay Rupay Card.

How to Use Dhani Pay Card?

Dhani pay is a prepaid card with wallet. So you need to add money to your wallet to use the card. You can add money using credit/debit cards, or net banking. You can also use the Dhani Personal Loan feature to get an instant loan for using your Dhani Pay card. Once you add money, you can start using the card and earn exciting rewards. You can use the card for recharge/bill payments, travel bookings, shopping, and more. Dhani pay card limit is Rs. 10,000 for minimum KYC users and Rs. 1,00,000 for full KYC users.

How to Use Dhani Pay Card Online?

How to Manage Your Dhani Pay Card?

You can easily manage your Dhani Pay using the Dhani App. The app allows users to set transaction limit, change PIN, and block/unblock card at any time. If your card is lost, you can block instantly using the card block feature

Dhani Card comes with many benefits which make it a must-have financial instrument. You can get instant personal loans with 3-minute approval. There is also shop now, pay later feature. You can shop at over 30 lakh merchants and pay later in EMIs. The card is also rewarding for customers. In addition to that, you get accident insurance up to 2 lakhs.

Dhani Pay Digital Card is free. However, if you want to order a physical card then you need to pay Rs. 199 + appliable taxes. You will also be charges Rs. 50 annual fee from 2nd year onwards.

How to use Dhani Pay Card to withdraw money?

You cannot withdraw money using your Dhani Pay Card. However, users with full KYC can transfer funds to any bank account. To transfer money using the Dhani app, you need to be a full KYC user.

You can opt for minimum or full KYC. There are some differences between the two. With Minimum KYC, the monthly spend limit is Rs. 10,000 balance. While Full KYC users,

get a higher limit of up to Rs. 1,00,000. Full KYC customers are also allowed to transfer funds to any bank account as well as other Dhani Pay prepaid accounts.

To complete your full KYC, you need to submit the application form, KYC documents, and a photograph.

To use Dhani Pay Card is very easy. Once you have activated your card using the Dhani App, you need to add money using any mode of payment.

You can also apply for Dhani personal loan to fund your card. While using the card online, select credit card as the mode of payment and follow the regular procedure. If you are still unable to use your card check your KYC status or you can get in touch with dhani pay card customer care.

How to redeem Dhani cash?

Use Dhani Cash for paying your loan or credit line EMIs. You can also redeem to pay the subscription amount of Dhani Super Saver cards, stocks, insurance amount using the Dhani app.

Can I use dhani pay card in paytm?

You can use Dhani card at over 3 million merchants. However, it is not clear whether you can use the card in Paytm.

Where can I use dhani pay card?

Use your Dhani card at over 3 million merchants. The card can be used for utility payments, travel booking, shopping, and offline transactions.

How to use dhani pay platinum rupay card?

To use the card you need to add money to your prepaid wallet. You can add money using credit/debit card or net banking. You can also apply for Dhani personal loans to fund your wallet.