How to Watch Extraction Full Movie for Free?

Extraction on Netflix is set for April 24 release. You can watch Extraction movie for free. Keep reading to know more 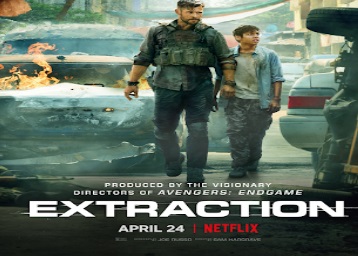 Netflix is ready with its next movie Extraction. The action thriller movie on Netflix features Chris Hemsworth in the lead role. Extraction on Netflix is the story of a fearless black market mercenary on a mission to rescue the kidnapped son of an international crime lord. The movie is shot in several cities across India.  Meanwhile, Money Heist Season 4 is streaming on Netflix.

Chris Hemsworth revealed the release date for his new film Extraction is a video message for his fans. The trailer of Extraction Movie on Netflix is already out on the YouTube channel of Netflix India. The actor was supposed to promote his upcoming movie in India but his trip was called off due to Coronavirus Pandemic. The next Indian original Series on Netflix is Hasmukh Starring Vir Das. You can watch Hasmukh Series on Netflix starting 9th April.

Extraction movie on Netflix will be out later this month. The release date of the upcoming movie on Netflix is April 24. In the movie, Chris Hemsworth plays the role of Tyler Rake a fearless black market mercenary. Tyler Rake embarks on mostly deadly extraction to rescue the son of an international crime lord. Randeep Hooda is also a part of Extraction cast.  Also, if you want to know more about The Lift Boy Movie click on the link provided.

The upcoming Netflix movie has a big Indian connection with Indian actors such as Pankaj Tripathi, Randeep Hooda and Manoj Bajpayee. Also, a major portion of the movie was shot in India.

How to Watch Extraction Full Movie Online For Free?

Netflix is offering a 30-day trial for new users in India. If you want to watch Extraction on Netlfix, you can register for a new account and start your free trial. For select users, Netflix 30-day trial is available for Rs. 5. You can visit Nextflix to check eligibility for the 30-day free trial offer.

Note: Netflix 30-day trial is available for new users in India. Some users can activate the trial for free while others need to pay Rs. 5 to get Netflix free trial. You can visit Netflix.com, to check eligibility for the offer.

Extraction stars Rudhraksh Jaiswal, Randeep Hooda, Golshifteh Farahani, Pankaj Tripathi, Priyanshu Painyuli, and David Harbour among others. The film is directed by Sam Hargrave, and produced by Joe and Anthony Russo. The duo directed the blockbuster movie Avengers: Endgame. The movie was shot in Ahmedabad and Mumbai.

Chris Hemsworth is ready for action in his new Netflix movie Extraction. Extraction is an edge-of-the-seat thriller directed by Sam Hargrave. The movie is all set for release on 24th April.

How Can I Get Netflix Free in India?

Netflix is offering 30-day free trial to new users in India. So you can get 1-month of Netflix for free. Apart from that, you can get Netflix free with select postpaid plans.

Which is the latest movie on Netflix?

Extraction of Netflix is the latest movie starring Chris Hemsworth. The movie releases on 24th April. Extraction is shot in India and also features Indian actors such as Randeep Hooda and Pankaj Tripathi.

Which Indian Movies are on Netflix?