How to Watch Hasmukh Web Series For Free?

Netflix is ready with its new Indian original series Hasmukh. The dark comedy features Vir Das in the lead role. 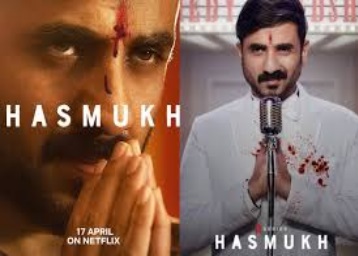 The show is directed by Nikhil Gonsalves. Hasmukh is the four collaboration of Vir Das with Netflix. The actor has featured in three stand up comedy specials for Netflix.

The release date of Hasmukh is out and soon you watch the Netflix series. If you wish to Watch The Last Kingdom On Netflix, check out the link to watch all the episodes for free.

Netflix has dropped the first trailer of its upcoming series Hasmukh. The show will release on April 17.

The show is directed by Nikhil Gonsalves and features Vir Das in the titular character of Hasmukh.

Hasmukh has been in the news since 2019 finally the show has got a release date. The show is about a young man from Saharanpur who wants to be the greatest comedian.

What is Netflix Free trial offer?

Netflix free trial offer is for new users. You get 30-day of free service from sign up.

If you continue using Netflix after 30 days you will be charged according to the plan selected at the time of sign up.

The offer is for new users on select credit and debit cards. During the trial period, you can cancel the subscription anytime without being charged.

If you are a subscriber of Vodafone Rs. 999 plan, you can activate Netflix subscription for free.

With the subscription, you can watch all Netflix content including the upcoming web series Hasmukh for free.

Vir Das portrays a strange and unusual character. The character portrayed is a stand-up comedian by the and a killer by night.

Is Netflix free for 30 days?

Netflix offers 30-day free trial to new users. You can get 30-days of Netflix for. There is no charge for cancellation during the trial period.

Which is the cheapest Plan on Netflix?

The mobile-only plan of Netflix is available for Rs. 199 per month. The affordable plan has been targeted at mobile users. You can stream on your smartphone using the mobile plan of Netflix which is the cheapest plan os the streaming service.

Is Netflix Free for Vodafone users?