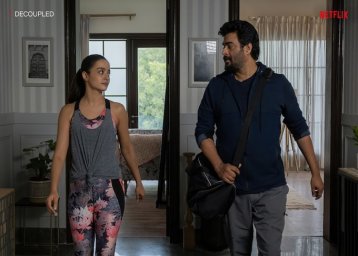 Whether you believe it or not, web series are the new source of ultimate entertainment in the past few years. OTT platforms like Netflix, Amazon Prime, Hotstar, MX Player, and others are giving excellent content every month. Now Famous superstars like Ajay Devgan are also ready to make their digital debut through The Rudra web series.

This December month is coming with lots of web series and movies on different OTT platforms. Nowadays web series are coming with more realistic content, here we are giving you the complete information about the upcoming web series in December 2021 along with their release date, cast, and more.

Also, check out the upcoming Hindi series in 2021 by clicking here. Check out the new web series in December 2021 here with their release date for further information.

Check out all the upcoming Indian web series in December 2021 here. Also, check out the Sonyliv web series list in 2021 by clicking here.

Toss the coin for your Witcher, because The Witcher Season 2 is coming by the end of this year and the third season is officially on its way. After the fate of Iron Throne in the Games of Thrones finale, we have to wait for months for the next fantasy fix to arrive. Netflix the streaming giant announced that this one is coming on 17th December 2021 after two years.

It will be an eight-episode series and very well-known Superman Henry Cavill is returning as the monster hunter Witcher and continuing his adventure across the vast world.  It is one of the most awaited upcoming web series releases in December 2021.

You will see R Madhavan and Surveen Chawla in the lead in this upcoming Indian web series that is coming on Netflix. In this R Madhavan has a disease called chronic objectivity. This disease makes him trouble wherever he goes and also affects his marriage life. For more information regarding the same click here.

It is a comedy-based web series that is coming on 17th December 2021. It is one of the awaited web series of R Madhavan

Emily in Paris Season 1 is one of the most loved Netflix, from the maker of Sex and the City, it is one of the best Netflix series. The first season is 10 episodes and has earned two 2021 Golden  Globe Nominations.

The new show comes with new faces and new actors. The new series is now coming on 22nd December 2021 on Netflix. Netflix has officially announced the release of the second season of Jamtara. It is one of the most successful web series in India that was based on a true event in Jamtara. They took their social media account to disclose the details for the upcoming season.

It is all about a Phishing racket and it is also about the bank detail callers and other scams. The release date for the same is still disclosed and we are hoping that it will be coming in December 2021. Most of the cast will be the same and we are looking forward to it.

Release Date - To be Announced Asur Season 1 is one of the biggest hits of the Voot India web series in which Arshad Warsi is playing the lead role. The series was created by Gaurav Shukla, Shweta More, and Vibhav Shikdar. It was developed by Ding Entertainment and Viacom Studios.

The cast for the second season will be same as per the information and it includes Arshad Warsi as Dhananjay Rajput, Barun Sobti as Nikhil Nair, Anupriya Goenka as Naina Nair, Ridhi Dogra as Nusrat Saeed, Sharib Hashmi as Lolark Dubey, Amey Wagh as Rasool Shaikh, Pawan Chopra as Shashank Awasthi, Vishesh Bansal as Shubh, Gaurav Arora as Kesar Bharadwaj, and many more. As per now, no release date is available but we are expecting the same in December end. For more information about the upcoming web series click here. This one is the next project of Actor-producer Ajay Devgan starring Pratik Gandhi and Richa Chadha. The shooting for this web series has been wrapped and it will be coming on Disney+Hotstar. This Six Suspect upcoming Indian web series is directed by Tigmanshu Dhulia.

It will be a murder thriller-based web series that revolves around the son of a minister of Uttar Pradesh. The home minister hosted a party and someone killed his son and when they investigate the case, they bring six faces as suspects.  The official release date for the same is not out till yet, but we are expecting the same in December 2021. Also, check out how to watch 420 IPC on Zee5 for free by clicking here. Bollywood superstar Ajay Devgan is all set to make his digital debut with this upcoming Hindi web series in December 2021. It is a crime drama series that is based on Britishers series Luther.

Leading actress Rashii Khanna is thrilled and very nervous to work with Ajay Devgan on this project as the shooting for the same is completed. It will also star Atul Kulkarni, Esha Deol, and more. Rudra- The Edge of Darkness is produced by Applause Entertainment in association with BBC Studios. The release for the same is still not available but we are expecting the same in December End. It is crime thriller drama-based web series that is directed by Rajesh Mapuskar, Tanuj Chopra and produced under S K Global Entertainment. The release date for the same is not out but we are expecting one soon. The second season of the much-anticipated thriller web series is done with shooting and we are expecting the same in December 2021.  Imtiaz Ali and Divya Jhori also shared some photos of the screen on their social media platform Instagram.

The director  Arif Ali and Avinash Das confirm that the second season will bring more drama and intensity to this coming Indian web series. This Netflix web series is one of the most awaited web series in which our famous star Madhuri Dixit will make her digital debut. The first look for the same is out and it will be produced by Karan Johar.

As per Netflix, it is all about a global superstar who disappears, and the police start an investigation and reveal the hidden truth of painful lies in the life of an iconic actress. As of now, no official date has been given but we are expecting the same in December 2021.

This is all about the New Hindi web series in December 2021 with the complete details of release date, cast and more. We hope this information will help you to make the best choice to watch in your spare time.

Web series like The Family Man season 2, Mirzapur season 2 are still trending and others like Scam 1992 are trending now.

Q. What Web shows are released in September 2021?

Girgit and Aafat-E-Ishq were released in September 2021.

Scam 1992 and The Family Man are the best web series of all time in India.