How to Watch She Web Series for Free?

The upcoming Netflix Indian Original series ‘She’ to release on 20th March. Check out the methods to watch and download ‘She’ web series for free.

Here in this post, you get all the information about the upcoming Netflix original series, also get to know about the different methods to watch She web series for free. Meanwhile, Guilty web series on Netflix premieres on 6th March. The web series has Kiara Advani in the lead role. 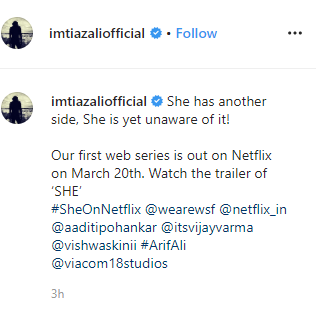 The upcoming Netflix original series will release on 20th March 2020 1:30 pm IST in India and across the world. Netflix has rolled out a trailer of the original series.

The trailer showcases the primary characters and plat of the Netflix series. She web series is produced by Viacom18 Motion Pictures, Tipping Point, and Ali.

The trailer features Gully Boy fame Vijay Varma and Aaditi Pohankar in the lead roles. Imtiaz has dropped the trailer of the web series on his Instagram page.

How to Watch ‘She’ Web Series for Free?

How to Watch ‘She’ Season 1 For Free on Vodafone?

Netflix provides the option to download content via its mobile app. You can select the download option to watch your favourite series and movies on Netflix for free. The option works as an offline mode where users get to watch their content at a later time. With the option, you can also download ‘She’ web series for free.

Aaditi Pohankar portrays the role of Bhumika a senior constable while Vijay Varma will be seen as a thief. Bhumika goes undercover to nab the big narcotics dealer Sasya.  She is about the events that take place on her hunt for the accused.

With the She web series, Netflix is adding to the list of its original content in India. The company has already come with originals in India such as Jamtara, Ghost Stories, and Taj Mahal 1989. She is the first web series for Imtiaz Ali who has recently directed Love Aaj Kal 2.

What is Netflix Subscription charge?

Netflix plans start Rs. 199 onwards in India. The Rs. 199 plan is mobile-only for Netflix. The company is also said to working on long terms plans to make its subscription cheaper.

What is Netflix Mobile Plan?

The streaming company has launched a mobile-exclusive plan for users in India. Netflix Mobile plan is available at Rs. 199.

How to start Netflix Free trial?

Netflix free trial is available for 30-days. You can sign up on the Netflix website to avail the offer. Fill up the sign-up form and provide credit/debit card details to start your free trial. Remember to cancel the subscription before 30- days to stop being charged.