Here are the best Indian web series to watch on YouTube. 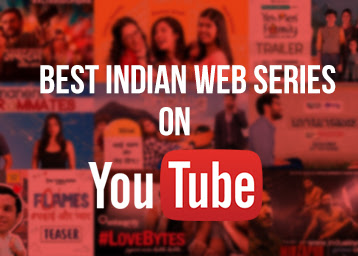 Do you like to watch web series online? But don't want to pay the subscription charges for services of Netflix, Prime Video, and Hotstar. Guess what some of the best web series' are available on YouTube.

Yes, a lot of Indian Web series' are available on Youtube that you can watch for free. In case you are confused about the choice.

Here are my top picks for the best Indian web series on Youtube that can be watched for free. I am sure you would like to watch them. In this article I have tried to provide choices for every genre whether you like romantic, thriller, or comedies there is something for everyone.

Also Read: Youtube Premium Launch in India: How to Start Your Free Trial?

If you like online deals, freebies and cashback offers, subscribe to our Telegram Channel. We promise to deliver the most relevant offers and deals and offers. Simply click on the link and join the channel!

The Viral Fever web series Aspirants, Aspirants revolves around three friends who live in Delhi as they prepare for the UPSC exam. Aspirants web series consists of 5 episodes that you can stream on YouTube.

The story follows UPSC aspirants who often spend years preparing for the exams as they chase their dream of becoming an IAS officer.

The web series Little things, is about the everyday adventures of a young couple Kavya and Dhruv living together in Mumbai. The first season was released on YouTube in 2016. It comprises of 5 episodes. The dialogues are natural and a strong point of the series. The show is very relatable and never boring.

The show has garnered millions of views. The truth about most relationships The show deals with tiny aspects of everyday life faced by young couples. Little things, is non-dramatic that is what makes it stand out. It captures the imagination of internet audiences.

After the success of the first part that is available for free on Youtube. The second part of Little things is available on Netflix.

Duration of each episode: 16-17 minutes

The web series is based on the life of Indian television actors. It is a crazy take on the lives of Indian TV stars. The web series takes you to the behind the scenes drama of the TV industry.

All the 5 episodes of the series are available on Youtube. You will see some of the most popular actors of the TV industry like Drashti Dhami, Karan Wahi, Karan Patel, Rithvik Dhanjani. Rajeev Masand, Sana Sheikh etc.

The show is a complete entertainer. The satirical take on the lives of popular TV stars makes it watchable.

Duration of each episode: 18-20 minutes

The plot of Man’s world is satirical. The dialogues can sometimes go overboard that is why I recommend this show only for its laughter. The show features popular Bollywood actors like Parineeti Chopra, Kalki Koechlin, and Richa Chadha.

Although the web series is intended to highlight gender equality. There are many moments that make it a worth watch. You can watch the four-part web series on Youtube for free. It shows the effect of role reversal of genders which turns the scenes hilarious.

Duration of each episode: 12:16 minutes

As the name suggests, it is about the journey of a young girl in a big city. The show is a hit among the urban crowds. A young girl comes to Mumbai to fulfil her dreams. It is a realistic story of every other person that comes to the city to achieve goals. It is also about dreams and aspirations. The show is appealing to youngsters with its language, dialogues, and story.

Show Name: Girl in the city

Duration of each episode: 12-13 Minutes

The series shot in six episodes is about independent women in urban India. The Killer dialogues of all the episodes stand out. Each episode is just over 10 minutes.

It is real and funny. It is also bold, you will not see many shows or movies going in this territory. The web series is about two girls Khanna and Dingo who are on a quest to sort their messed up lives.

Duration of each episode: 10 minutes

The web series explores the unusual relationship between an AI app and humanity. A.I SHA My Virtual Girlfriend includes 7 episodes. The show is also translated into Tamil and Telegu. The show keeps you guessing until the end. A.I.SHA is India's first sci-fi web-series. The twists in the plot keep you on the edge of the seat.

It is basically how an artificial intelligence program develops human-like feelings. A young app developer Sam creates an artificial intelligence program, Aisha. The thing takes a turn when AISHA develops a mind of own and falls madly in love with Sam. The season 2 unfolds many twists with new characters also coming into the equation. A third season is also in the works.

Duration of each episode: 20 Minutes approx.

The show is made with urban viewership in mind. Love Bytes is a 26 part web series tarring Kushal Punjabi and Sukhani Sadana. The show is about the daily challenges of an urban Indian relationship.

The web series targets the youth with the real-life situations of a young couple. With the relatable storyline, you can get an instant to connect with the love bytes.

Duration of each episode: 7-15 minutes

Baked is the story of three flatmates who decide to start a midnight food delivery service. You get 7 episodes of 23 minutes each. Presented by ScoopWhoop talkies, the first season of this web series released in 2015.

The misadventures of three friend power this comedy and you have a good time watching it. The second season was released in 2016.

Duration of each episode: 23-25 minutes

The web series is all about smart writing and witty dialogues. The crime investigation series is set in the backdrop of the fashion industry. Alisha is an unlikely blend of fashion and mystery.

The series follows the adventures of two friends who solve a crime in Mumbai. It is India's first-ever female web detective series. All the 10 episodes of Alisha are available to watch on Youtube.

Duration of each episode: 25 minutes approx.

You can also download the web series on your mobile. With Youtube, you get download feature where you can watch videos in offline mode as well. Now take a look at few more Indian web series you can watch online for free on Youtube. All the episodes are available on Youtube to binge-watch over the weekend.

The 8 short films of the web series deal with the different facets of modern relationships. Love on the Rocks is about falling in love, live-in relationships, and complexities that millennials face. Every episode brings a new story. You can watch all the 8 episodes of Love on the rocks on YouTube Channel of Mensxp. All the stories are about millennial love.

Duration of each episode: 15-17 minutes

The Indian web series makes for a good weekend binge. This Times Internet's original series is available on Youtube. Get ready for the biggest Dulha hunt with Dulha Wanted. You can watch all the 12 episodes of the web series for free. The groom hunting was never so interesting before iDiva's web series "Dulha Wanted"

Duration of each episode: 20 Minutes approx.

Flames, reminds you of tuition class crushes. The simplicity and realness add to the innocent romance portrayed in the web series. The new web series from The Timeliners is the story of a romance unfolding in chemistry tuition classes. This one is definitely for young audiences. This 5-episode web-series is available to watch on Youtube.

Duration of each episode: 12-23 minutes

Adulting is about flatmate camaraderie. Relive the moments away from home with roommates. The web series is a worthy watch and you can stream all the episodes. The four-episode web series is from Dice Media. Adulting is the story of two young girls sharing an apartment in Mumbai. You will find the portrayal of adulthood relatable in the series available on Youtube.

Duration of each episode: 25 Minutes approx.

Watch this one for its quirky sense of humour. The show encapsulates the struggles of a young man who is forced to live with his in-laws for a while because of work. The conventional family drama deals with realistic uncomfortable situations that unfold in a hilarious way.  The eleven episode series is how a modern family deals with stereotypes to overcome the generation gap.

Duration of each episode: 25 minutes approx

Streaming content has become more affordable with the arrival of Jio. Other telecom operators have also started to provide heaps of data at very affordable prices.

So data is not generally a problem while streaming content. The only hurdle is the subscription charges of OTTs but with Youtube, you can watch some really good content free of cost.

Don’t you know? You can get a month free trial of Prime Video and Netflix. Use your subscription wisely to watch popular web series for free.

More Indian Web Series you can watch For Free

It is more of a documentary than a web series. Rubarro Roshini is available on Hotstar. You can watch for free. The duration of the show is just over one hour 50 minutes. It tells three real stories and the movie has received rave reviews of audiences of all age groups. Rubaru Roshni is a hard-hitting yet emotional movie that attempts to change your perspective.

Sacred Games is the first Indian series of Netflix. Inspired by a Novel of the same name, Netflix is about cops and gangsters. The series begins when Sartaj Singh (Saif Ali Khan) gets a call from Gaitonde (Nawazuddin Siddiqui). The much talked about web series has some stellar performances. You can watch all eight episodes of Sacred Games with Netflix 1-month free trial.

Amazon Prime's latest Indian web series is based in the crime-infested Uttar Pradesh. Mirzapur is the rise of two brothers in the world of crime. The India crime thriller web series is produced by Excel Entertainment.

You can watch all the episodes with 30-days free trial of Amazon Prime Video. Mirzapur comprises of nine episodes. Prime Video is also available at subscription charges of Rs. 129 per month and Rs. 999 for one-year. Also, check how to watch Mirzapur web series for free.

Laakhon Mein Ek makes viewers think by asking some serious questions. The web series portrays how kids deal with pressure cooker situation. The expectation of parents as well society is something young minds have to deal with on a daily basis.

The pranks of Aakash and his friends provide comic relief. Lakhon Mein Ek deals with student issues such as frustration, segregation, and hostility. It is available on Amazon Prime Video.

Ghoul is a horror drama starring Radhika Apte and Manav Kaul. It keeps you hooked from start to finish. The three-episode web series released in 2018. Ghoul is streaming on Netflix. And with the mini-series, you can expect something that Bollywood movies have never forayed into.

If you want to watch more Indian web series you can check out the channels like Dice Media, The Viral Fever, Y films, The Timeliners, and SonyLiv to name a few. In recent times, more and more channels have started to release web series on Youtube. With these Youtube channels, you can get loads of fresh content for free. The relevance of on the go content is on the rise. And there is a lot of content that you can watch for free.

Which is the best Hindi web series?
Sacred Games season 1 is one of the best Hindi series. In addition to that, you can say Mirzapur, Paatal Lok, Asur, and Kota Factory are also excellent.