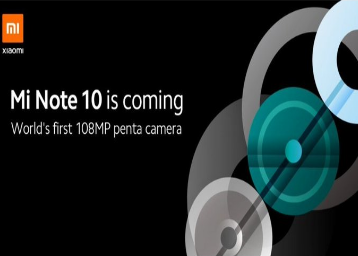 Update: Xiaomi has officially announced that a smartphone with a 108MP camera will soon launch in India. It is likely going to be Mi Note 10. The smartphone comes with a five-camera setup at the back.

Xiaomi has confirmed the launch of its latest smartphone - Mi Note 10. And one of the key highlights of the upcoming smartphone is its five-camera setup at the back that includes a 108MP sensor. The smartphone is allegedly powered by the Qualcomm Snapdragon 730G chipset.

At the event, Xiaomi is also expected to launch its new TV series as well as a smartwatch. The company recently launched Redmi 8, Redmi Note 8, and Redmi 8A in India.

The Chinese company has confirmed November 5 as the date for the launch of its new products. Xiaomi is expected to launch more than one product at the event. Mi TV 5 series and Mi Watch are the other products to launch alongside Mi Note 10.

Xiaomi has confirmed the presence of five cameras on the rear that includes a periscope lens with up to 5X optical zoom, 50X digital zoom, and 10X hybrid zoom. The main sensor is a 108MP Samsung ISOCELL Bright HMX sensor. Mi Note 10 will also sport a 20MP ultra-wide-angle camera. 12MP portrait camera, and 1.5cm macro camera.

The price and availability of the smartphone is yet to be known. Mi Note 10 will be the world's first 108MP Penta camera phone.

There is still a question mark whether or not Xiaomi will bring its next flagship smartphone to India. We expect an announcement regarding its India availability at the launch event on November 5.