The Samsung Galaxy A30s and A50S launched in India with many new features. 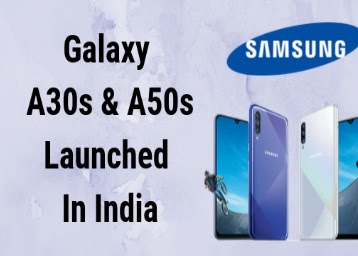 The upgraded versions Samsung Galaxy A50s and A30s are made with new designs, faster processors as compared to their predecessors and with an upgraded triple camera.

The new Galaxy A50s and A30s have now been listed on Samsung India's official website. The newly launched phones are available to buy on Samsung's official site in India.

The website has listed the two smartphones along with their RAM variants only. The Galaxy A50s comes in 4GB and 6GB RAM options, while the Galaxy A30s are listed with 4GB of RAM.

If you want to know more about Samsung New Galaxy M30s Launch  on Amazon India then click on the provided link.

The newly launched Samsung Galaxy A30s has a 6.4-inch HD+ (720x1560 pixels) Infinity-V Super AMOLED display and runs on Android 9 Pie with One UI on top.

Samsung Galaxy A50s is the new addition to the A-series with a triple camera and a Night-Mode feature, which is the latest feature in A-Series and many other new features. It is an upgraded version of Galaxy A50 which launched earlier this year. The Samsung Galaxy A50s is now available at Samsung.com with EMI options, Exchange offers and more.

The Galaxy A50s and A30s will be available with telecom offers such as double data on Rs 198 and 299 prepaid plans for Jio subscribers, Double Data on the Rs 249, Rs 299 and Rs 349 plans for Airtel users and cashback offers for Vodafone users.