Realme to launch two new smartphones in India on 20th August. Realme 5 will launch on Flipkart with price expected to be under Rs. 10,000. 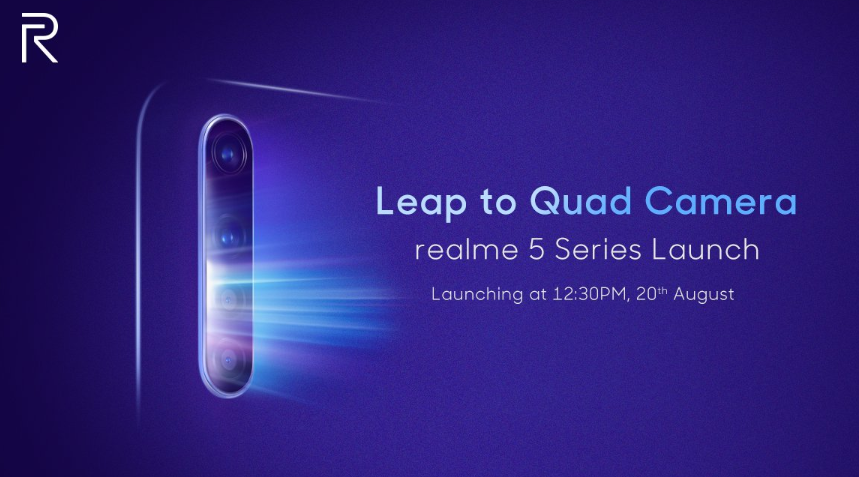 A teaser on Flipkart reveals Realme is about to launch a Quad camera smartphone soon. The upcoming smartphone launched on 20th August. Meanwhile, a lot of rumours have been made about Realme 5.

The smartphone is priced at Rs. 9,999 in India. In fact, Realme CEO Madhav Seth has confirmed the price in a tweet. Realme has been able to create a niche in the under 20k price segment in India. Earlier this year, the company celebrated its 1st anniversary in India.

Recently, Realme X was launched in India. The smartphone is one of the most affordable smartphones to come with a pop-up selfie camera. The next-generation smartphone will be equipped with a quad-camera setup. 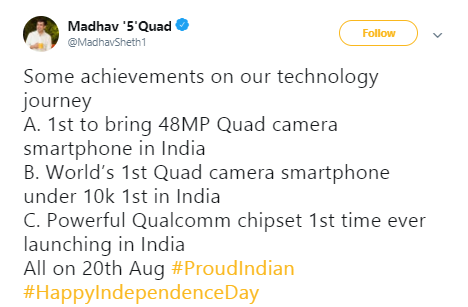 Realme 5 is the 1st Quad camera smartphone under 10k. The tweet also reveals 1st time ever launch of Qualcomm chipset in India.

As part of the launch event, the company is also holding a contest on its website where users get a chance to win Realme 5, Realme Backpacks, and Realme Buds.

How to register for Realme 5 contest

The second smartphone to launch at the event is Realme 5 pro. The headset will house a quad-camera setup with 48 MP Sony IMX586. Realme 5 Pro will be equipped with VOOC 3.0 flash charge. The smartphone market is heating up with aggressive launches of manufacturers. Realme is also the hinting launch of a 64MP camera smartphone very soon.