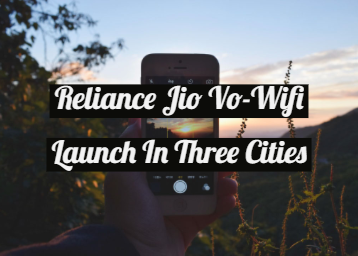 Reliance has recently announced the launch of VoWi-Fi service. The company has started to test VoWi-Fi service in some circles. Reliance Jio is yet to reveal the official details about VoWi-Fi calling service.

The Jio VoWi-Fi services are available in three cities in India which are Maharashtra, Kolkata, and Kerala. Jio is currently testing its services in these three circles only. Which means select users from these areas are already using Jio's VoWi-Fi facility on their smartphones.

Notably, Reliance Jio is yet to announce its VoWi-Fi service in India officially. Still, now that the company has started the testing process, we can expect the service to be available for all users very soon. Also, if you want to know more about Jio GigaFiber Launch click on the link.

The Reliance VoWi-Fi is the latest technology which is for the users help who are stuck in a situation with no cellular connectivity. In that situation, if the user has a Wi-Fi connection, then they will able to make a call to anyone in their contact using the Voice Over Wi-Fi technology.

Reliance Jio has rolled out the service in three circles for testing. The Reliance Jio has officially not announced the Jio VoWi-Fi services. Some Jio customers are noticing the availability of Jio Wi-Fi on their smartphones.

The three circles where the Jio VoWi-Fi is said to be available include Maharashtra, Kolkata, and Kerala.

Meanwhile, Airtel Vo-WiFi calling service is currently available in select circles including Delhi NCR, Andhra Pradesh, Karnataka, Tamil Nadu, Mumbai and Kolkata. The telecom operator has confirmed that the Wi-Fi calling service will be gradually rolled out across other states in India