Airtel has launched a new W-Fi Calling service for its subscribers. Airtel VoWiFi is launched in Delhi-NCR with support for 24 smartphones. 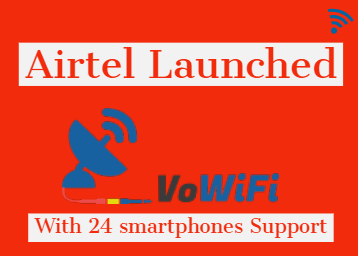 Airtel has launched Voice over Wi-Fi service for its customers. The VoWi-Fi service is rolled out in the Delhi NCR circle. Airtel VoWi-Fi will be soon launched in other circles. The service helps to deal with network issues.

Reportedly, Jio has also been working to launch VoWi-Fi service soon. The competition is heating up in the telecom operator. Recently, Airtel unlimited plans were launched for prepaid users by the company.

Here are more details on the Airtel Wi-Fi Calling feature.

Update: Airtel Wi-Fi Calling is now available across all circles (Except J&K) on all broadband providers.

The technology also allows users to connect to any Wi-Fi network and make outgoing calls. Users can make outgoing calls to any mobile number or landline. The VoWi-Fi technology provides much better call connection time and quality as compared to standard and VoLTE technology. The best part is that the user doesn't any separate app for Wi-Fi calling.

Airtel is the first telecom operator to launch VoWi-fi service for Indian subscribers. Although the service is available only for Delhi-NCR users, it is expected to extend to other circles soon. The company has also notified the mobile phones for which VoWi-Fi feature will work at the time of launch.

How to Make calls over Airtel VoWi-Fi?

The service has been launched with support for 24 smartphones of top brands. Airtel VoWi-Fi service will be soon extended to other headsets. The telecom operator is also planning to extend the service to other circles as well.

Airtel has launched its Wi-Fi calling service in the Delhi-NCR circle. The service will be soon extended to other circles as well. To use the feature you need a supported headset and an Airtel SIM card of Delhi circle.

Does Airtel have WiFi calling?
Recently, Airtel introduced wi-fi calling service. The service is available in all circles except Jammu and Kashmir. Subscribers need a 4G SIM and supported headset to make calls on wi-fi.

How do I make WiFi calls?