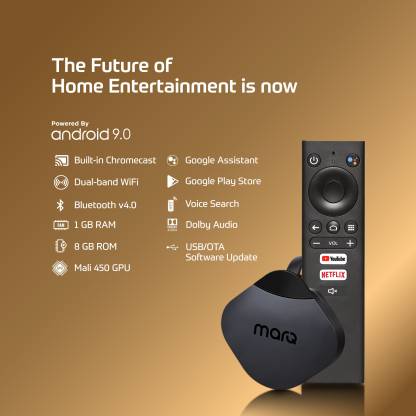 Flipkart has launched a streaming stick 'MarQ Turbostream’. The device allows users to cast their mobile screen on the TV and supports all apps available on the Google Play Store. The smart streaming device takes on Airtel Xtream Stick and Amazon Fire TV stick. Earlier, Flipkart introduced a video streaming service for its app users.

Flipkart MarQ TurboStream Stick is priced at Rs. 3,499. The streaming dongle is available with no-cost EMI starting at Rs. 292/month. A 5% discount is available on Axis Bank Buzz Credit Card.

At this price, it is direct competition with Airtel Xstream stick which was launched earlier this year at Rs. 3,999. While Amazon Fire TV Stick is available in two versions of Rs. 3,999 & Rs. 5,999.

The streaming dongle converts a standard television to a smart TV. It comes pre-loaded with Android 9.0 OS. MarQ Streaming stick comes with Full HD resolution of 1920 X 1080 at 60 frames/second. It has 1 GB DDR3 RAM, 8GB ROM and streaming support for 2.4 GHz and 5 GHz WiFi.

With MarQ TurboStream Stick you have one more choice for streaming dongles. With the launch, Flipkart enters the TV streaming market in India. The streaming stick is similar to the Amazon Fire TV stick and Airtel Xstream stick.

What is a streaming stick?

It is a small media player that can be plugged into an HDMI port. They are portable and come with smart features.

What are the best streaming sticks and devices in 2019?