Airtel Xstream Box is packed with many smart features. Check the price, features and plans of new Airtel Set-top Box. 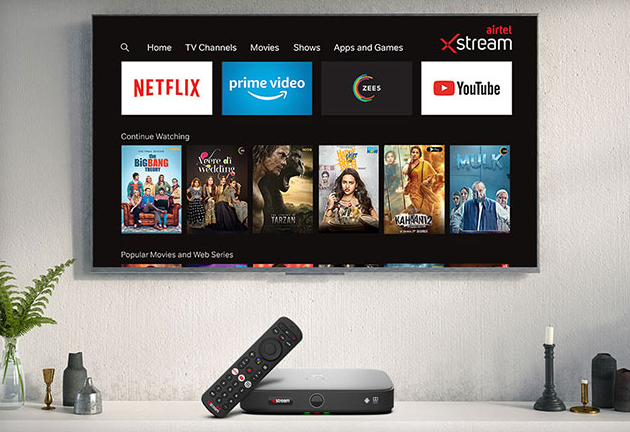 Airtel Xstream and Xstream stick launched in India. It is the smart set-top box of the company. Recently, the company rebranded its Airtel TV app to Airtel Xstream. Meanwhile, the streaming service will continue to exist on the app and web as well.

Airtel Xstream Box is available at a special price of Rs. 2,499. The new age DTH television box was originally launched at a price of Rs. 3600. With the special offer, you can purchase the Xstream box at this discount price. You can order online from Airtel's official website.

Airtel Xstream Plans come with a variety of benefits. You can also a choose as per the download speed.

Here are more details on the price, features, and plans of the device.

Airtel Xtsream Box combines both satellite TV and OTT content. The customers have the option to choose from over 500 TV channels. It also provides access to the Airtel Xstream app and other OTT platforms such as Amazon Prime Video, Netflix, Zee5, Hooq, Hoi Choi, ShemaroomMe, and Curiosity stream among others. 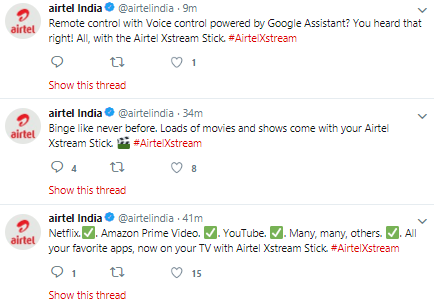 The 4k Hybrid Box is priced at Rs. 3600. However, Airtel Digital TV customers can get Xstream Box at a discount price of Rs. 2,499. The company is offering a free one-year subscription to airtel Xstream app content and a one-month subscription of HD DTH pack.

There is also a one-month free subscription to HD DTH Pack after which customers can subscribe to any Airtel DTH pack of their choice.

The price included the monthly network capacity fee of Rs. 153. The plan includes a total of 93 channels. You get 15 HD Channels with Rs. 360 plan of Airtel Xstream Set-top box.

By clicking on the plan, you will channel details. It is a monthly plan, and you can change it at any point in time. The Rs. 462 plan offers 139 channels. There are 21 HD channels in the plan. It also provides complimentary access to the Xstream app.

With the Rs. 499 per month plan, you get unlimited data at 40 Mbps. The monthly plan also includes unlimited local and STD calls. Additional benefits of the plan include Xstream Premium, Apollo Circle membership, FASTag & Wynk music.

With the Xstream 799 plan, you get up to 100Mbps speed. The plan includes unlimited local and STD Calls. Additional benefits of this plan include Xstream Premium, Apollo Membership, FASTag, and Wynk Music.

With the Rs. 999 plan, you get 200Mbps internet speed. Additional benefits of this plan include Disney Plus Hotstar and Amazon Prime. You also get Xstream Premium, Apollo membership, and Wynk Premium. The Rs. 999 plan also makes you eligible for VIP service.

The set-top box allows users to download apps from the Google Play store. It runs Android 9.0 Pie. So users can download apps such as Amazon Prime Video, Netflix, and Youtube. The connectivity options include wi-fi and Bluetooth. There is also a built-in chrome cast.

Airtel Xstream box is available at a special price of Rs. 2499 for Airtel Thanks customers. The offer is applicable in select cities. Select your city and enter your mobile number to see if you are eligible for the Airtel Xstream offer. The eligible customers get an Airtel Xtsream box at a special price of Rs. 2499.  The regular price of the device is Rs. 3,600.

How to Avail Airtel Thanks offer on Xstream Box?

Airtel Xstream Stick is for digital streaming the device comes without access to DTH channels. Based on Andriod 8.0, it has a built-in Chromecast, a voice-enabled remote, and Bluetooth 4.2 functionality.

Airtel Xstream Price in India is set at Rs. 3600. It comes with a one-month free content subscription plan. The annual subscription is available at Rs. 999. While Airtel Platinum and Gold customers get complimentary access to the content.

The universal remote features Google Assistant and dedicated keys for apps like Netflix, Amazon Prime Video, and YouTube. The picture quality is pretty good. There are 3 quality settings low, medium, and auto.

Also, the OS takes very little time to boot. It supports 4K with HDR and 5.1 surround sound for supported apps. The Bluetooth connectivity allows users to connect Bluetooth headphones and speakers. The device has 1 DTH input, 1 HDMI, 1 Optical, ethernet, RCA, and USB. There is a micro SD card slot as well.

Finally, Airtel has launched its smart set-top box “Xstream box” in India. The device will face direct competition from the Jio Set-top box that has been launched commercially as well. You can purchase the Airtel Xstream box online from Flipkart or offline through Airtel stores.

What is Airtel Xstream Box?

It is a smart device that combines satellite TV with OTT content. Airtel Xstream Box is a modern-day entertainment device with many smart features.

No, the device can be used with any TV. Airtel Xtream box turns a normal into an Android Smart TV. The device combines satellite TV and OTT content. You also get features such as Bluetooth connectivity, a voice-based remote, and more.

Is Airtel XStream box worth it?

If you are looking to invest in a set-top box, it is better to go with a smart device such as Airtel Xstream Box. It is a modern-day entertainment device with many useful features.

Can I Play Netflix on Airtel Xstream Box?

Yes, the device supports various popular OTT apps. You can download the Netflix app from the Google Play store and play content on your TV using the Airtel Xstream box. The remote also has a dedicated button to launch Netflix.