Code m is the latest web series on Zee5 and AltBalaji. Here in the post, we discuss different methods to watch Code M for free. 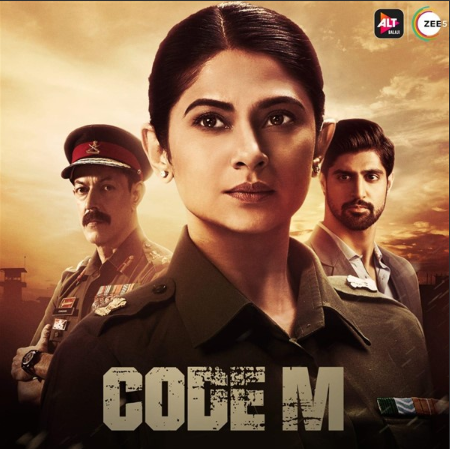 Code M is the digital debut of Jennifer Winget. The actress is popular for her small-screen roles in popular shows such as Beyhadh.

Earlier this year, Shweta Tiwari, another big name in the television industry marked her debut with Hum, Tum and Them web series. Code M web series is available on popular OTT platforms Alt Balaji and Zee5. Recently, Ekta Kapoor announced a sequel to this web series. Since the announcement fans are eagerly waiting for Code M Season 2; for all the details on the release date, cast, and streaming details scroll down.

Here in this post, we also tell about how to watch Code M Series for free.

The first season of the web series is already out on ALTBalaji. The suspense thriller is the story of an Indian Army officer who is also a lawyer investigating a case. Jennifer Winget plays the center character of the show.  Code M web Series Season 1 is streaming on Zee5 and Alt Balaji. Season 2 has also been announced which is expected to release very soon. It is one of the most anticipated web series of this year.

How to Watch Code M Series For Free? 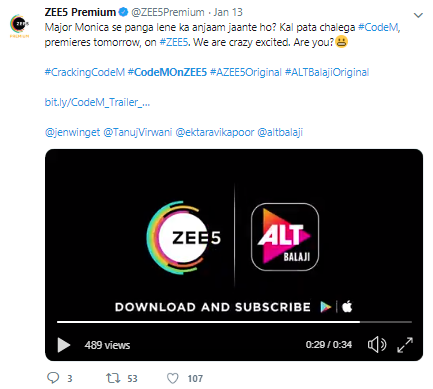 To watch the web series, you need a premium subscription of AltBalaji and Zee5. However, there are also a few tricks that allow you to watch the Code M series for free.

For Instance: If you are a Vodafone-Idea Subscriber, you get free access to Zee5 premium with select recharge plans which means you get to watch the latest web series and movies free with your monthly recharge plan. Meanwhile, the Zee5 subscription is also available for Paytm First users. You can also recharge with Airtel Rs. 289 plan to watch Zee5 premium free for 28 days.

How to watch Code M Series For Free

The web series has a total of eight episodes. Each episode has a duration of 20 - 28 minutes. And all the episodes are available for streaming.

In the show, Jennifer Winget is seen in a never seen before avatar. If you want to watch a thriller series, then Code M is definitely a great choice. The season

What is the subscription fee for Zee5?

The OTT platform has monthly and yearly subscription packs. The yearly access pack of Zee5 costs Rs. 999. While the monthly subscription fee is Rs. 99. You also get regional packs like Tamil, Telugu, and Kannada at different prices.

You get access to the latest shows on Zee5 with Vodafone recharge plans. Activate your free 12-month membership with eligible prepaid plans.

How many devices can use zee5?

With a Premium subscription, you can stream content on up to 6 devices.

ZEE5 app is available on both the Play Store and the App Store. You can watch ZEE5 on TV via Chromecast. For select content, the offline option is available as well.