The first comedy Show of Netflix in India 'The Brand New Show' is all set to release. The celebrity talk show will be Youtube Only and it premiers 31st October. 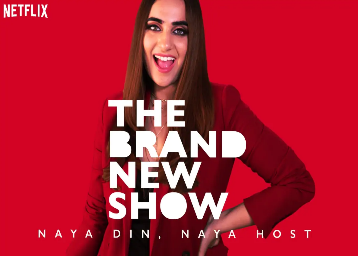 Update: The first episode of The Brand New Show is already out and you can stream for free on YouTube.

Netflix India continues its spree of providing fresh content to users. Netflix has announced a new talk show - "The Brand New Show". The Youtube only show will premier October 31.

It will air fortnightly with a new host and celebrity guests. Meanwhile, the mobile plan that Netflix launched recently for Indian Users has received a good response. Netflix Mobile Plan is available for Rs. 199.

The new talk show of Netflix will Premier October 31. The comedy show will air fortnightly on Youtube. Meanwhile, Drive will release on November 1. The Indian web series starring Sushant Singh Rajput and Jacqueline Fernandez is the first original from Karan Johar’s Dharma Productions to release on Netflix.

How to watch The Brand New Show on Youtube?

How to Watch 'The Brand New Show' Episode 1

The first episode of the show is available On Netflix. You can watch the episode for free. It is available on YouTube channel of Netflix.  To watch 'The Brand New Show' episode 1 click here.

The trailer of the comedy show was recently released on 18th October. It is a comedy show based on the concept of a celebrity talk show. You can watch a new episode every two weeks on Youtube.

Since the launch of its streaming service in India Netflix has come with interesting content for Indian audiences. But the most popular series remains sacred Games. Recently the second season of the show was also released. If we speak of the latest web series then Upstarts released on 18th October. And Drive will release on 1st November.

Netflix offers 4 plans to its users in India. The cheapest plan starts at Rs. 199. The mobile-only plan was launched recently for Indian users. The basic plan of Netflix is available for Rs. 499. In addition to the standard plan is available at Rs. 649. Netflix has a premium plan for Indian users at Rs. 799.

The streaming platforms have provided Indian audiences with a lot of fresh content. Netflix has been one of the leading platforms with popular series like Sacred Games, Lust Stories, Bard of Blood, and Upstarts.

How to watch Netflix Series For Free?

Start your 30-day free trial to watch Netflix Series for free. The offer is available for new users only.

What is Netflix Mobile Plan?

The Subscription plan was launched for Indian users at an affordable price of Rs. 199. Netflix Mobile plan is for mobile users only.