How to watch Zee5 Free - Special Trick for Jio, Vodafone and Airtel Users 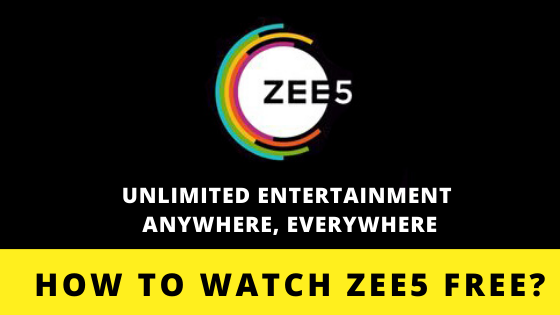 Zee5 is a very popular streaming service and with Zee5 Premium you can enjoy some of the best shows at any time in the comfort of your homes. Now you don't need to to spend money to get Zee5 Premium. Today we are going to tell you how to watch zee5 free.

In this article, we have listed different ways to watch zee5 for free. To get Zee5 Premium for Free keep reading.Also, we have tricks that can help you watch Hotstar Premium for free.

Zee5 Premium has unlimited shows. Movies, and original web series. There are different tricks that you can use and binge-watch Zee5 Premium for free without having to pay for the subscription. Let’s check out the benefits of Zee5 Premium that makes it a must have app.

With Zee5 subscription you get complete access to watch unlimited Zee5 Original Shows. You need an Zee5 Premium Account for your binge-watching need. If you subscribe for a Premium Account then you get some special benefits that you can enjoy.

Here we have listed a series of tricks you can use to get Zee5 Free Subscription. You can use these tricks and get Zee5 Premium Account free of cost.

The tricks are specifically for Airtel, Vodafone, and Jio users. If you use any of these mobile networks then you can get Zee5 Free Subscription.

How to watch Zee5 for free on Airtel TV App

If you are a Vodaphone user you can enjoy unlimited Zee entertainment om Vodafone Play App. You can watch more than 4500+ Zee5 unlimited content with Vodaphone Play. To watch Zee5 free on Vodaphone Play App, follow the steps below. Only Vodafone users can avail of this method.

How to watch Zee5 free on Vodafone Play?

How to watch Zee5 free on Jio Cinema app?

Zee5 is known for some of the most popular streaming content in India. From gritty tales from Indian suburbs to thrillers from the big cities, Zee5 Originals have managed to capture narratives set across the width and breadth of India, bringing out stories that were perhaps never explored before.

So if you are looking to binge-watch and enjoy shows and movies on your next weekend, here are some of the best original content that you can find on Zee5 OTT Platform.

Zee5 has a great collection of short films starring extremely talented actors. Below we have listed the top Zee5 short films that you can watch for free using the tricks we have suggested.

Why Zee5 is the best ott platform in India?

Zee5 is India’s largest OTT platform in India. If you are wondering what makes Zee5 is the best ott platform in India then here are the reasons. Zee5 started in February 2018 and it streams content in 12 languages.

So, this way you can watch all Zee5 shows and original web series online free of cost. Enjoy Unlimited Entertainment anytime and anywhere with Zee5.

2. What is the cost for Zee5 Premium?

4. What is zee5 subscription?

By creating an account by sharing your credentials, you can start using Zee5. You will be required to pay a monthly subscription fee, to access your favourite content on Zee5. These plans can be on a monthly, half-yearly or yearly basis.

By visiting the Zee5 website or mobile app, or by following the steps mentioned above, you can pay for Zee5.

As mentioned above, you can get Zee5 for as low as Rs. 99 per month.