How to Watch Yaara Full Movie For Free? 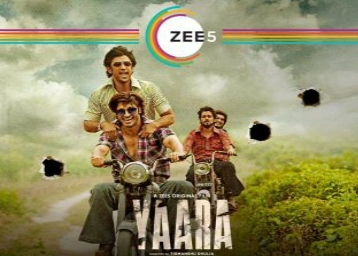 Yaara is the latest movie to have a digital release. Vidyut Jammwal, Amit Sadh, And Shruti Hasan starrer Yaara, is all set to release on Zee5. The movie is directed by Tigmanshu Dhulia. The crime drama is the story of four friends.

With the digital release of the movie only a few days away, if you are looking to Watch Yaara Full movie then keep reading to know more about the best offers. Also get details on Yaara Movie release date, cast, trailer and more. Another major OTT release of the week is Avordh: The siege within. The web series will premier on SonyLiv. For more details on Avrodh web series click here

Yaara is set in the backdrop of North India. The movie follows the lives of four friends. Yaara is said to be a remake of the 2011 French movie, A Gang Story. Vidyut Jammwal, Amit Sadh, Shruti Haasan, and Vijay Varma will be seen in pivotal roles. Recently, the announcement of Yaara release date was made on social media platforms. 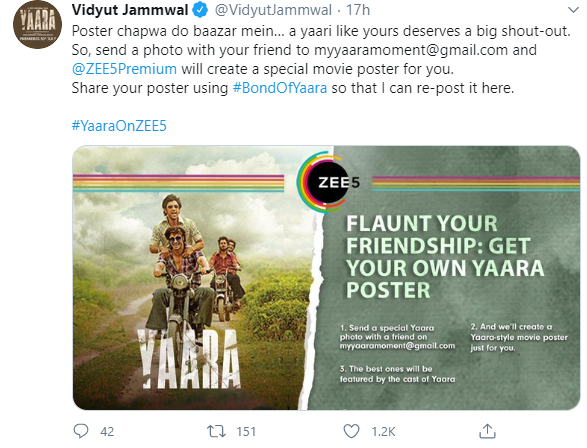 Several movies are opting to digital release. The makers of Yaara recently announced that the movie will release on Zee5. Yaara movie will hit the digital screens via Zee5 on 30th July. It is the latest movie to release on the streaming platform. Meanwhile, Virgin Bhanupriya released recently on Zee5. The streaming platform has many interesting releases lined up for August.

You can watch Yaara full movie on Zee5. If you already have Zee5 subscription, you can log in to your account and watch the full movie online. Or you subscribe to any premium plans of the streaming service. The premium subscription plans are available Rs. 99 onwards.

In addition to that, you can watch Yaara full movie for free as well. Zee5 premium content is available for free with select prepaid and postpaid plans of telecom operators. Vodafone users get free access to Zee5 content via Vodafone Play. Airtel is also providing free Zee5 premium membership with select plans.

How to Watch Yaara Full Movie For Free on Vodafone?

Zee5 allows users to download content as well via its mobile app. Users can download their favourite shows and movies on Zee5 and watch later in the offline mode. Users also get the option to choose a download quality as per their preference. Content is available in low, medium and high quality.

Yaara is the latest movie to release on digital platforms. The movie will be available on Zee5 starting 30th July. Yaara is a tale of friendship set in the backdrop of North India.

How to get Zee5 Subscription Free?

How to activate Zee5 free subscription on Airtel?

Recharge with Rs. 289 plan, and claim your free membership via the Airtel Thanks app. You will be directed to Zee5 website/app, enter your number and verify with OTP to activate your free subscription.

How Do I Get Zee5 Free trial?

Zee5 free trial is not available at the moment. Once the offer is back we will update the post on how to start your free trial of Zee5.

What is the price of Zee5 Premium in India?

Zee5 premium is available on monthly, half-yearly, and yearly subscription plans. The monthly subscription of Zee5 costs Rs. 99. While the yearly membership is available for Rs. 999. You can also subscribe to regional packs of the streaming platform.