How to Watch Avrodh Web Series Online For Free?

SonyLIV has announced its new web series, Avrodh: The Siege within. To know more about the web series, keep reading 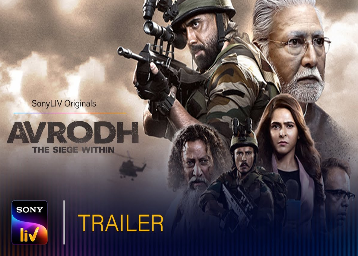 Avrodh: The Siege Within is a highly rated series. The web series is based on the 2016 surgical strike conducted by the Indian army. Avrodh web series brings a different side of the event, that remained in the headlines for a long time.

Avrodh web series is based on surgical strikes conducted on terror launch pads across the Line of Control by the Indian army in 2016. The topic has already been explored by the 2019 movie, Uri: The Surgical Strike starring Vicky Kaushal. The movie focussed on the execution part while Avrodh will target the planning stage of the strike. Amit Sadh and Neeraj Kabi play important roles in the SonyLiv original series.

The first trailer of the web series is already streaming on SonyLiv. It is receiving a positive response from the fans. Avrodh The Siege Within is based on Rahul Singh and Shiv Aroor’s book, India’s Most Fearless. The web series premiered on July 31 on Sony Liv.

It showcases the planning of the 2016 surgical strike. Now, Avrodh season 2 is all set to release on Sonyliv. The trailer for second season is already out.

The web series is streaming on Sony Liv. You can watch all episodes of the Avrodh web series with Sony Liv Premium subscription. The streaming platform has three premium plans for users. You can subscribe to monthly, six-monthly, or yearly plans to watch premium content on Sony Liv.

The monthly subscription of Sony Liv costs Rs. 299, While the yearly subscription is available for Rs. 999. There is also a six-month subscription plan of the streaming platform price at Rs. 699. Subscribe to any plan of your choice and watch Avrodh web series online.

How to Watch Avrodh Web Series for free?

Avrodh Season 1 has nine episodes in total and the average running time per episode is 23-25 minutes.

What is the price of SonyLiv Premium?

With Sony Liv premium subscription, you can download content from the app. The content is stored on the app and you can watch anytime in the offline mode.

Sony Liv free trial offer is not available at the moment, once the offer is back we will update the post to help you start your free trial and watch premium content for free.