How to Watch 'Out Of Love' Web Series For Free 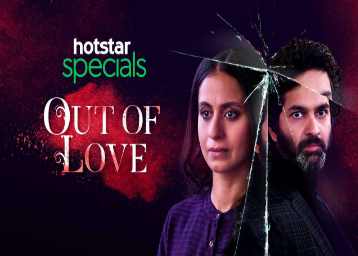 Hello readers! One more exciting web series is soon going to launch on Hotstar. Out of Love Trailer is out and the Indian series will start streaming 22nd November. Out of Love is directed by Tigmanshu Dhulia and Aijaz Khan. The Hotstar Original series is produced by BBC Studios.

Also read: How to Watch Chappad Phaad Ke on Hotstar.

Update: Out of Love season 2 is streaming on Hotstar. You can watch the web series with select recharge plans of Airtel, Jio, and Vi.

The release date of the web series was recently announced. Out of Love premiers on 22nd November on Hotstar. You can stream the series with Hotstar VIP and Premium subscription. The streaming company has recently released Chappad Phaad Ke & Kanpuriye Under Hotstar Original movies.

Out Of Love Season 1 Trailer

Out of Love is based on award-winning British series Doctor Foster. The trailer and release of the next Hotstar Original series was recently announced. The first look of the show depicts the emotional and psychological dilemma of complex relationships.

How to Watch Out of Love Web Series For Free?

Out Of Love Season 1 Cast

Out of Love is the story of a married couple played by Rasika Dugal and Purab Kohli. The series is directed by Tigmanshu Dhulia and Aijaz Khan.

Under the Hotstar Specials the streaming platform has so far launched original series like Criminal Justice, Hostages, city of Dreams, The Office, and Roar of Lions.

Hotstar Subscribers get access to content under the Hotstar Specials label. The users also get to watch Star Networks serials and live sporting action. Hotstar VIP subscription is priced at Rs. 399 per year.

The OTT platform also has a Premium subscription that has the added benefit of the latest American Shows and Hollywood movies. The Hotstar Special features Indian Stories across genres.

What is Hotstar VIP plan?

How do I activate Hotstar on my smart TV?