How to Watch Ghoomketu Full Movie for Free online?

Zee5 Original movie Ghoomketu starring Nawazuddin Siddiqui to release soon. For all the details on the upcoming movie read on ..... 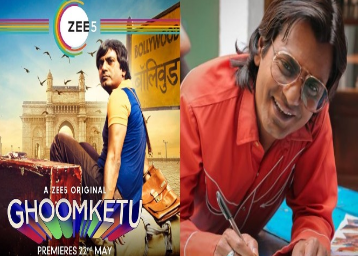 Zee5 is all set to entertain you with its new quirky comedy film Ghoomketu. The upcoming Zee5 original film is the story of an aspiring writer. The role is played by Nawazuddin Siddiqui. Recently, a teaser of the Zee5 Original film Ghoomketu was released.

If you are also excited to watch the quirky comedy film, read on to know how to watch Ghoomketu Full movie online for free. Later in this post, we also discuss if and how you can download Ghoomketu full movie. Meanwhile, you can watch RejctX Season 2 for free on Zee5.

In the movie, Nawazuddin Siddiqui will be playing a quirky never seen before character. With a phenomenal storyline, Ghoomketu is all set to entertain the audiences during the time of the lockdown.

Due to the lockdown caused by Coronavirus, movie producers and directors have decided to release their films digitally. Ghoomketu is also a movie that will be soon released on Zee5. The release date for Ghoomketu movie is 22nd May.

Ghoomketu promises to be a humorous film that you can watch with your entire family on ZEE5.

The movie has been directed by Pushpendra Nath Misra.  Ghoomketu movie is produced by Phantom Films and Sony Pictures Networks (SPN).

Zee5 has come with a lot of original content to provide users with ample choice across all categories. Recently, the romantic drama series Baarish 2 releases on the streaming platform.

The teaser of Ghoomketu, was recently rolled out for audiences. It gives a sneak peek into the quirky comedy-drama movie. The teaser of the upcoming Zee5 movie ticks all the boxes and promises to be a great watch.

The teaser opens with Siddiqui, entering the city of dreams, Mumbai. Kashyap plays the role of a lazy police inspector who is assigned the case of finding a missing person, Ghoomketu. However, Ghoomketu himself visits the police station complaining about his stolen scripts.

To watch the latest content on Zee5, you need the premium membership. However, there are a few methods that allow users to watch the content for free as well. Vodafone users get free access to Zee5 web series, movies, and shows via Vodafone Play.

Recently, Airtel also announced free access to Zee5 premium membership for its select prepaid and postpaid users. The offer is valid on unlimited plans of Airtel. Airtel Zee5 offer is valid till 12th July. You can activate your free Zee5 subscription via Airtel Thanks app.

Once you have started your free trial, you can also download the full movie for free using Zee5 app. With the option, the streaming app allows users to download all episodes one by one.

The movie has three tracks one of which is sung by Bappi Lahiri. The lyrics of all the songs by Pushpendra Nath Mishra. The Music for Truck Song and Inspector Badlani Song is given by Sneha Khanwalkar. While Bird Song is sung and composed by Jasleen Royal.

It is an OTT platform run bu Essel Group. Zee5, on-demand video streaming service was launched in 2018. Zee5 has many subscription plans for users of all languages. With the unlimited plans, you can stream content on up to 5 screens. The plan costs Rs. 99 per month or Rs. 999 for 1-year subscription. While the 6 months all access package of Zee5 premium costs Rs. 599.

Ghoomketu is one of the many Bollywood movies to get a digital release due to the ongoing social distancing measures announced by the health experts. Gulabo Sitabo, Shakuntala Devi, and Laxmmi Bomb are some of the major movies to get an online release very soon.

How to Get Zee5 Premium membership for free?

Airtel is providing free Zee5 premium membership to select users. The offer is valid for select prepaid and postpaid users. You can watch Zees5 movies and shows for free with Airtel.

Is Zee5 Free for Airtel?

The telecom operator is providing free access to Zee5 unlimited plan with select prepaid and postpaid plans. You can activate your free Zee5 membership with Airtel Thanks app.

What is the price of Zee5 membership in India?

Zee5 membership is available in different plans. The yearly unlimited plan of the OTT platform is available for Rs. 999. While the monthly subscription of Zee5 costs Rs. 99.