How to watch City of Dreams Web Series For Free?

Watch City of Dreams web series for free on Hotstar. The political drama is directed by Nagesh Kukunoor. You can watch all episodes with Hotstar Premium. 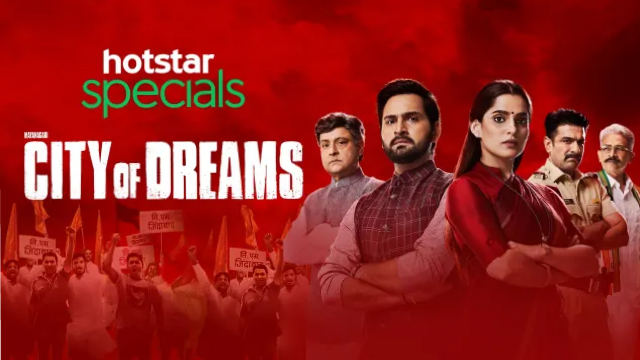 City of Dreams is a series under the new "Hotstar Specials" banner. The series is created and directed by Nagesh Kukunoor.

City of Dreams is a political drama that centres on two siblings and thirst for power.

City of Dreams released on Hotstar in May. The web series is available in seven languages - Hindi, Marathi, Bangala, Tamil, Telugu, Kannad, and Malayalam.

The intense political drama is set in Mumbai with Indian politics in the backdrop. Criminal Justice is another intense web series on Hotstar specials.

Watch City of Dreams on Hotstar For Free

Watch the popular web series on Hotstar for free with a free trial. The free trial is available to select new customers. Hotstar offers yearly and monthly subscription plans to users.

The yearly plan of the streaming service costs Rs. 999 while the monthly subscription plan is available at Rs. 299. The company also has "Hotstart VIP" subscription at Rs. 365 per year.

If the free trial is not working, it is simply, ask for premium account login/password from a friend and watch the web series for free. There are many more web series on YouTube that you can watch for free.

The new original under Hotstar specials released on 3rd May 2019. To watch the web series, you need a Hotstar premium or Hotstar VIP subscription.

City of Dreams is one of the most popular web series on Hotstar. The web series with a backdrop of political drama is written and directed by Nagesh Kukunoor. With the launch of Hotstar Premium, the streaming platform is looking to provide content to Indian viewers.

The streaming platform has already released Roar of the Lion and Criminal justice among other web series under Hotstar Specials.

It is quite useful, helps you save time for buffering issues while watching your favourite shows.

The Shoot-out: The first episode introduces us to the characters. It starts with an assassination attempt on Ameya Rao Gaikwad political stalwart in Mumbai.

The Response: In the second episode, Wasim gets a lead on Gaikwad's shooters. Poornima starts to take charge of the situation.

The Hunt: The show starts to hit its stride in the 3rd episode.

The Shooters: Inspector Wasim asks the commissioner to put him on the case. But then things take an unexpected turn.

The Decision: As Ashish Fails to keep his promise, Poornima decides that she won't back down. Meanwhile, Wasim makes progress with the case.

The Murder: When Poornima starts to take matters into her own hands, the sibling conflict begins to show. Meanwhile, Wasim tracks down the assassin.

The Mastermind: When Poornima starts to take matters into her own hands, the sibling conflict begins to show. Meanwhile, Wasim tracks down the assassin.

The Betrayal: As Gaikwad wakes up the story once again takes a fresh turn. Gaikwad has to make difficult decisions.

The Victor: In the lead up to the grand party meeting, matters come to ahead. Someone will win and someone will lose.

City of Dreams has got positive reviews from both the audience as well as critics. It has elements of greed, power, and vengeance. Even though “City of Dreams: is slowly paced yet it is a compelling watch.

So that is one more web series that you can add to your list of must watches over the weekend. City of Dreams is a political drama that also deals with sibling rivalry. The webs series directed by Nagesh Kukunoor is worth a watch.