How to Watch Avengers Endgame Free online in India?

Avengers: Endgame is streaming on Hotstar. You can watch the Marvels Movie with Hotstar VIP and Premium. 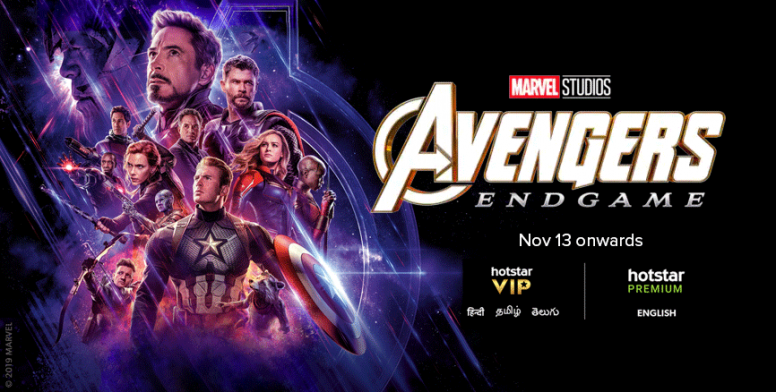 The biggest Hollywood movie ever Avengers: Endgame has already made its global digital release. In India, the Movie is available on Hotstar. You can watch Avengers: Endgame with Hotstar Premium and VIP subscriptions. The movie made its digital debut on 13th November.

The movie is available in Hindi, Tamil and Telugu languages for Hotstar VIP members. While Hotstar Premium members also get to watch Avengers: Endgame in English.

Meanwhile, the latest originals to release on Hotstar is out of Out Of love. You can stream the series with Hotstar VIP subscription.

With the digital release of Avengers: Endgame, Marvel fans can now watch the movie anytime. The digital release came less than six months of its theatrical release. Normally, The Marvel movies take a minimum of a year to become available for streaming in India.

How to Watch Avengers Endgame Online in India?

Hotstar VIP is a new and cheaper subscription plan for the streaming platform. Hotstar Vip provides access to Hotstar Originals, Star network content, and live sports action. The subscription is available at Rs. 365 per year.

With the rise of streaming platforms, users have plenty of choices when it comes to content. Hotstar is one of the leading streaming services in India. Hotstar not only makes content available in different languages but also offers live sporting action to viewers. Avengers: Endgame is the latest addition to the list.

How can I get Premium on Hotstar?

Is Hotstar VIP and Premium the same?

Hotstar VIP does not feature premium English content from HBO, Disney, Hooq, and 21st Century Fox. However, you can watch Hotstar Originals, Star Network content, and live sporting action with the VIP subscription.