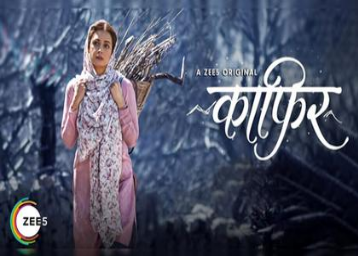 Yes, you can watch the highly-rated web series for free. In case you want to download Kaafir web series, you can do it easily to watch all the episodes offline. So to get all the information on Keb Web series download read on….

Meanwhile, you can also download The Test Case Web Series and watch all episodes for free.

The web series is set in Kashmir. It is the story of a lawyer/journalist looking for justice. Dia Mirza plays the role of a suspected militant taken into custody for many years. Mohit Raina can be seen in the role of a journalist. He is also a lawyer who begins his practice again to fight for justice for an innocent.

Kaafir web series is available on Zee5. It is one of the best-rated shows on the streaming platform. You need Zee5 premium membership to watch Kaafir web series. Kaafir marks the digital debut of Dia Mirza. The actress is popular for her roles in various movies such as Lage Raho Munna Bhai, Rehna Hai Tere Dil main etc.

If you have already subscribed, you can search for Kaafir on the Zee5 website or app to watch all episodes. In case, you want to watch the web series for here are a few methods. You can watch Kaafir web series for free on Vodafone.

Episode 2 - A Tale of Retrospection

Episode 6 - Where Do We Belong?

The web series is inspired by the beauty and turmoil of Kashmir. Kaafir is about a women Kainaz Akhtar from Pakistan occupied Kashmir who finds herself on the Indian side of the border. The woman is declared a militant and is put behind bars for eight years.

The story gains momentum when Vedant Rathod learns of her story. Vedant is a lawyer turned journalist. He decides to get justice for the woman.

The story is based on a true event. Kaafir is one of the better offerings on Zee5. Mohit Raina puts in a strong performance and Dia Mirza works hard to make Kaafir a one time watch.

How to Get Zee5 Premium subscription for free in India?

Airtel is providing free Zee5 premium membership to select users. The offer is valid for select prepaid and postpaid users. You can watch Zees5 movies and shows for free with Airtel.

Is Zee5 Premium Free for Airtel?

The telecom operator is providing free access to Zee5 unlimited plan with select prepaid and postpaid plans. You can activate your free Zee5 membership with Airtel Thanks app.

What is the cost of Zee5 Premium membership in India?

Zee5 premium membership is available in different plans. The yearly unlimited plan of the OTT platform is available for Rs. 999. While the monthly subscription of Zee5 costs Rs. 99.