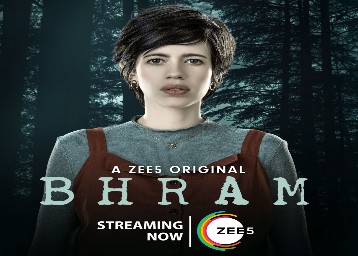 Are you looking for a web series that you can watch for free? We have a suggestion. You can watch Bhram web series for free. It is a supernatural horror genre series on Zee5 starring Kalki Koechlin in the lead role.

The plot revolves around a girl who is a bestselling author. A sudden accident turns her life upside down and strange things start to happen. There is enough suspense in the story to keep you hooked. So have you made your mind to watch the web series? You can Download Bhram web series for free using some tricks that we have shared late rin this post. Read on…

Meanwhile, Chintu Ka Birthday is streaming on Zee5. You can watch the family drama movie for free as well with the given trick.

Bhram web series is the story of a young girl Alisha. She is also a bestselling author of love stories. Turmoil begins in her life after a shocking car accident. To start her life again she decides to stay with her sister in the beautiful mountains of Shimla.

This is when strange things start to happens as Alisha starts getting visions of a girl that has passed away 20 years ago. The story is intriguing and gripping. The director has also captured the scenic beauty of the mountains. It is the ideal series to binge-watch.

If you are looking for an upcoming web series then check out The Casino web series. The web series starting streaming on 12th June.

If you have Zee5 Membership, you can easily watch all episodes of Bhram web series online. In case you don’t have the membership and you are wondering how to watch Bhram web series we have a few tricks to share.

Recently, Airtel announced free Zee5 subscription for its subscribers. Airtel prepaid and postpaid users get Zee5 unlimited plan for free with select plans. If you an Airtel user with a plan of Rs. 149 or above, you can claim Zee5 membership via Airtel Thanks app. Once your membership is activated you can watch Bhram web series for free on Airtel.

Episode 3 - Down the Cursed Road

Episode 7 - Skeletons in the cupboard

Episode 8 - The King of the jungle

How can I Get Free Zee5 Premium subscription?

You can recharge with Airtel prepaid plans of Rs. 149 or above to get Zee5 premium subscription for free. Airtel recently announced the offer for prepaid and postpaid users.

Is there free trial for Zee5?

Zee5 free trial offer is not available at the moment. However, you can watch Zee5 for free using Airtel offer. Vodafone users also get free access to Zee5 via Vodafone Play App.