The much Anticipated Huawei with three Leica triple camera will go on Sale from today onwards exclusively for Prime Users. The regular sale of the smartphone will begin from tomorrow onwards. 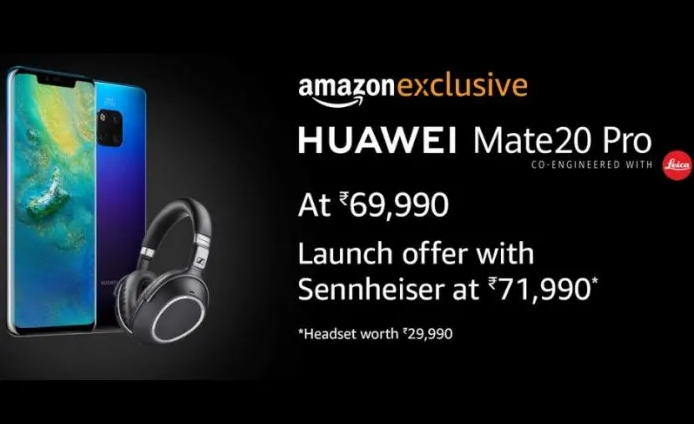 The Huawei Mate 20 Pro is as good on the outside as it is on the inside. It is definitely not a person but if it would have been then probably the best in the market. Ending all gibberish, it is the best which Huawei has currently for you to offer. Really great looks, AI almost everything, and a Leica triple camera rear set up of 40 MP.

Note: In case if you wish to know about Amazon Offers Online then click on the provided link below.

The anticipation has finally ended and the brand new smartphone by Huawei, the Huawei Mate 20 Pro has been released on the date of 27th November 2018. The launch event took place in Delhi at 11:00 AM IST.

The smartphone has everything that you would ever wish for. The Huawei Mate 20 Pro has been quoted at a price of Rs.69,990 in India. This is the price of the phone for the 6GB RAM and 128GB internal Memory variant. Also, you get the very good quality Sennheiser PXC 550 packaged together with the smartphone at a price of Rs.71,990. The actual cost of the headphones is Rs.29,990 and are in direct competition some of Bose headphones.

You know that the back panel in spite of the fact that it is made of Glass resists Fingerprint. The smartphone has all that you can expect from a flagship. It is by far among the most feature loaded Flagship smartphone currently available in the market. The Huawei Mate 20 Pro features a Hisilicon Kirin 980 SoC which is the topmost chipset by Kirin. Although, that is not the USP of the smartphone. Enough said the Huawei Mate 20 Pro has a camera that’ll sweep you off your feet. The smartphone features three Leica cameras at the back. It also offers 5X Optical Zoom which can capture images with great details. The Smartphone by default is set to 20MP but you can amp it up to 40MP by clicking on the setting. One very unique feature about the smartphone is its reverse charging. You can make your smartphone a power bank and reverse charge any device that supports wireless charging.

If you are looking forward to buying a flagship smartphone then I would suggest you end your quest at Huawei Mate 20 Pro. It is being launched in India to compete with flagships like Samsung Galaxy Note 9 and Apple iPhone XS Max. In case if you wish to read about Redmi Note 6 Pro Sale then click on the provided link below. We hope this article may have been of some help to you.