On Wednesday, Amazon announced the new Echo Show 5, the latest addition to the Echo Show family. The Echo Show 5 comes with a 5.5-inch display at Rs 8,999.

Interested buyers can head out to the Amazon India platform to pre-order a unit of the Echo Show 5 in either black or in white color variants. Amazon will then start shipping the device in the country from 18th July 2019.

The Amazon Echo Show 5 launched by the global e-commerce and web services giant. The newest member, Amazon Echo 5, features a 5.5 inch 960x480 pixel screen, a single full-range 1.65-inch speaker and a 1-megapixel camera. It is an affordable alternative to Amazon Echo Show, which is priced at Rs. 22,999. It has the same functionality and features as high-end devices. 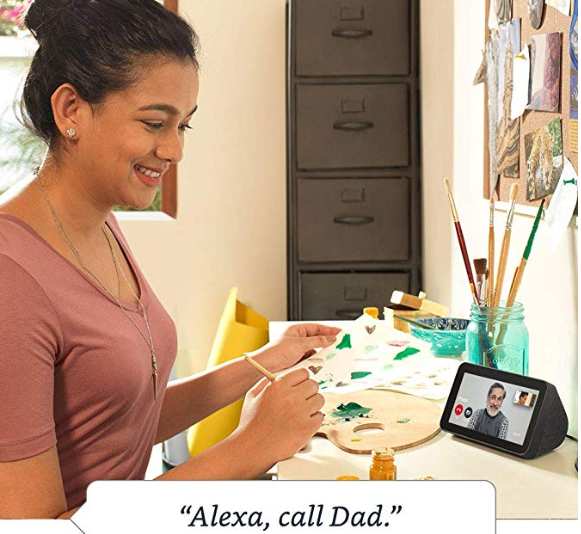 The Amazon Echo Show 5 can place video calls, Stream music, watch TV shows and movies on the Amazon Prime Video. Some Alexa skills can activate by the users, which will let the Echo Show 5 users use many functions.

A MediaTek MT8163 chipset powers it. The Echo Show 5 connects to the Internet using Wi-Fi. With a single button, the privacy concern of the Echo Show 5 addresses, which controls a physical shutter for the front camera, along with a switch that turns off the microphone as well. Soon the users will also be able to delete the voice recordings.

Amazon Echo Show 5 will be available in white and black variants. A lot like the Amazon Echo Show, which is for Rs. 22,999 has a smart display-cum-speaker, which will allow the users to communicate with Alexa. In the Echo Show 5, the 5.5-inch touch screen will enable users to get visual cues to Alexa’s verbal responses. It comes in handy on the device for functions like lists, watching videos or recipes.

The Amazon Echo Show 5 can also be used to listen to songs from Amazon Music, Saavn, Gaana, Hungama Music, and TuneIn, among others. The device could help you stay in touch through hands-free video calls to those who have an Echo Spot, Echo Show, the Alexa App, or Skype, the company said.

Note: if you want to know more about Amazon Echo Devices in india, click on the povided link.

How To Buy Amazon Echo Show 5