The new Oppo F-Series Phone is all set to launch in India in 2020. Keep reading to know more. 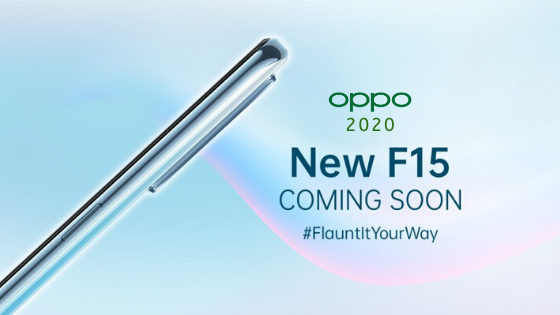 After launching Oppo F11 and F11 Pro in March 2019, there was a long wait of almost nine months for an announcement of the latest instalment in the Oppo F-Series. But that wait is now over, as Oppo has just announced the latest Oppo F15, which is all set to be launched in India very soon.

As many await the details on the specifications of Oppo F15 and also on the Oppo F15 Price in India, we have come to know that the new Oppo F15 is inspired by Oppo Reno and is expected to have some premium features of Oppo Reno Series.

In a recent press release, Oppo stated, “kick-off 2020 with a new sleek F series smartphone” making it abundantly clear that the Oppo F15 and Oppo F15 pro launch in India will be very early in 2020.

The previous Oppo F11 and Oppo F11 Pro were due for a reboot, and it was about time that Oppo announced a new F-Series Phone. The new phone will surely create a massive wave in the market as it is going to house some premium features, as per the expectations.

Note: To check out some of the best smartphones lined up for 2020, click here.

The Oppo F15 and Oppo F15 Pro Specifications, as declared by Oppo, are presumed to be more focused on selfies. The Oppo F 15 might have a powerful front camera, and as revealed by Oppo, the Oppo f15 will have a sleek and lightweight design.

With regards to the Oppo F15 Camera, it will at least have two rear cameras, although it might presumably be a bit more. Being inspired by Oppo Reno Series, a Quad Camera Setup cannot be ruled out just yet.

The Oppo F15 is anticipated to have a premium finish, just as it is in the Oppo Reno Series. A lot is being speculated about the Oppo F15 and Oppo f15 pro features, but more details are expected to be disclosed in January 2020.

Note: If you are looking for some of the recently launched smartphones in India, click here.

Here comes the most awaited Oppo F15 detail, the Oppo F15 and Oppo F15 Pro price in India have been widely speculated. The good news is, the Oppo F15 price is anticipated to be around Rs. 20,000 in India.

As the hype around Oppo’s new F-Series phones is generated, with its upcoming launch in January 2020, a lot of further details and features of Oppo F15 and Oppo F15 pro will be revealed in the coming days. To stay in touch with the latest developments, keep following our site for regular updates.