How To Watch Class of 83 Netflix Movie Online?

Check out all the details of the most awaited movie on Netflix, Class of ‘83. 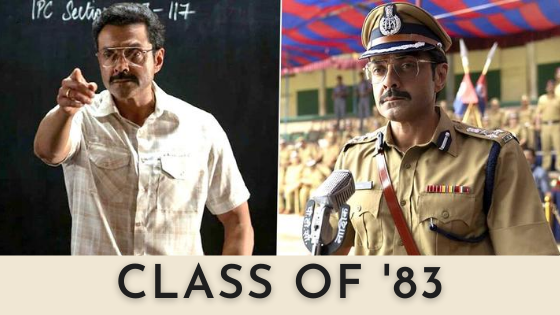 Netflix has been on a spree of releasing some of the most popular Indian movies in the past few weeks, and it has recently announced a new film, Class of 83, which is set to hit the platform very soon. It is a crime drama movie which is produced by Red Chillies Entertainment and is based on the book of the same name by Hussain Zaidi.

The movie stars Bobby Deol in its lead role, and here we are going to share with you all the exciting facts and details about the Class of 83 movie. After announcing the release of Gunjan Saxena: The Kargil Girl, about which you can learn more here, the Class of 83, promises to be another one of the most promising films, Netflix has lined up for this year.

Class of 83 Film on Netflix

The movie revolves around a shunted hero police officer named Vijay Singh, played by Bobby Deol, who has got a punishment posting to be the Dean of the police academy. He wants to fight corruption and criminals, and for that purpose, he starts to train five lethal police officers as assassins. However, the tides turn against him, and he has to face significant problems during his tenure.

If you want to watch this movie, then here is excellent news for you. Netflix has announced the Class of 83 release date, and the movie is all set to be released on 21st August 2020. It is expected to be one of the most popular releases this month. You can get to watch it by subscribing to the OTT platform as soon as it releases.

The Class of 83 Trailer was released on 7th August 2020 and till then has been able to get 4.9 million views on Youtube. The trailer showcases what viewers can expect from the film and the dark story of police officers versus the criminals. The trailer does manage to send a strong message about the Class of 83 Netflix movie and clearly makes audiences watch the film when it releases.

How to Watch Class of 83 Film Online?

If you are planning to watch the Class of 83 Netflix movie once it is released, then you can follow the steps given below to check out this Netflix movie.

Watch Class of 83 Online For Rs. 5 (For Select New Users)

Netflix India has a 30-day trial plan offer, to select new users, where you can watch all the popular movies and shows for only Rs. 5. Follow the steps given here to view the Class of 83 Netflix Movie only for Rs. 5.

Watch Class of 83 For Free (For Vodafone Red Subscribers)

If you are a Vodafone subscriber, then you can get to watch free Netflix content for one year. For that, you need to follow these steps.

If you want, you can also watch this Netflix movie offline with the help of the Download features available on the OTT platform. You can follow the steps below and download the Class of 83 Netflix movie on your device.

The movie has an excellent ensemble of the cast that makes it all the more desirable to check it out. Here is the list of the Class of 83 Netflix movie cast.

So this was all about the Class of 83 movie which is coming very soon on Netflix India. If you are looking for more such articles, news or blogs, then keep following our website for more information.

Q. When will the Class of 83 Netflix movie be released?

A. The movie will be released on 21st August, only on Netflix. So you can have a closer look at the film by following the steps shared in the article above.

Q. How can I watch the movie for free?

A. If you are a Vodafone Red subscriber, then you can check out the steps shared above and watch the whole movie on Netflix for free.

Q. Who are the main cast members of the Class of 83 movie?

A. Bobby Deol, Anup Soni, Joy Sengupta, Vishwajeet Pradhan, Bhupendra Jadawat, Hitesh Bhojraj, Sameer Paranjape, Ninad Mahajani, Prithvik Pratap and many more are a part of this movie’s cast. You can have a look at the whole list in the article above.

A. You can check out the movie online on Netflix where it will be released on 21st August.