Samsung Galaxy F41 Set To Launch In India: Know About The Price And Specifications 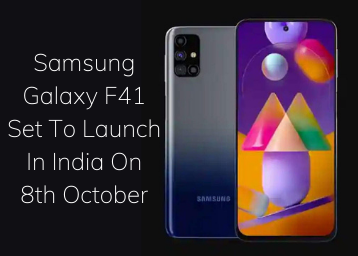 Samsung Galaxy F41 Set To Launch In India: Know About The Price And Specifications

Samsung Galaxy F41 is set to be launched in India on 8 October at 5.30 pm. The smartphone is going to be the first model in Samsung's newly announced 'F series.' The smartphone will be available exclusively on Flipkart.

Samsung is all set to launch this mid-range budget smartphone in India this October. The announcement of the unveiling of the phone has been Flipkart. Galaxy F41 will be a rebranded version of the Galaxy M31 which launched a few weeks ago.

Galaxy F41 will be available exclusively on Flipkart.com and Samsung.com websites starting at 5:30 PM on 8th October. The launch event will be streamed live on Samsung's YouTube channel, Flipkart, company websites, as well as all social media platforms.

Samsung Galaxy F41 will be a mid-range budget smartphone, and the F series smartphone will be priced between Rs. 15,000 to Rs. 20,000. It is rumoured that Galaxy F41 is a remodified version of the Galaxy M31.

The smartphone will run on Android 10 operating system and will be powered with an octa-core Exynos 9611 chipset coupled with 6 GB RAM. It.

To read about the best slim mobiles in India, Click here 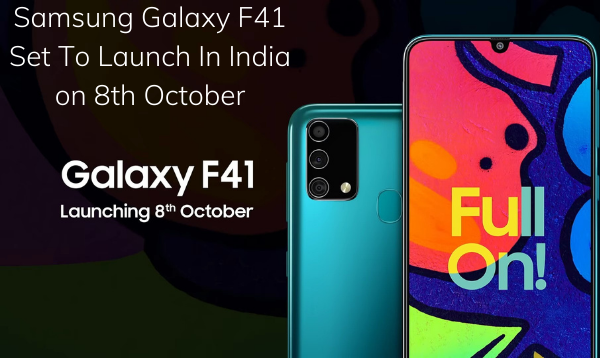 Hey if you are willing to know about us and what all we offer you then you can follow our Instagram channel with a CLICK on the link which we have provided. You can follow us there to know more about the fun activities we do, offers we provide, daily discount and cashback offer and much more. So, follow us now and then have a happy shopping experience with FreeKaaMaal!

The specifications of Galaxy F41 are not out yet, but it is said to be a remodelled version of Galaxy M31 which was launched recently. F series is the all-new series by Samsung.The smartphone will sport a Super AMOLED Infinity-U display and come packed with a massive 6,000mAh battery.

The virtual event to launch Galaxy F41, which will take place on 8th October' 2020, will give out the detailed specifications of the new smartphone. It will be a well-suited phone for gamers.

As of now, we have collected and enlisted the expected price and specifications of Galaxy F41.You can join the event by going to the Samsung website and their Youtube channel.

Samsung Galaxy F41 is all set to launch on 8th october' 2020 in India at 5:30 pm. It will be launched via a virtual event on Samsung's website, and it's youtube channel.

The countdown has already begun. The phone will be exclusively available on Flipkart and Samsung websites.

The price for the smartphone has not been announced as of now but is said to be a mid-range phone. The phone will come with 8GB RAM.

Samsung Galaxy F4 price and specifications have been enlisted for you to have a better understanding of the product. All of the above information is expected, you can begin to countdown to October 8th to buy the new Galaxy F41.

Q1. When is the Galaxy F41 launching in India?

A1. The Galaxy F41 is set to launch on October 8th' 2020 at 5:30 PM, and the smartphone will be launched on Flipkart and Samsung website.

A2. Samsung Galaxy F41 smartphone price in India is likely to be Rs 15,999. It is a mid-range smartphone which will be available on Flipkart and Samsung websites.