The Nokia 105 reboot and Nokia 220 refresh with 4G support is official. It will go on sale from next month. 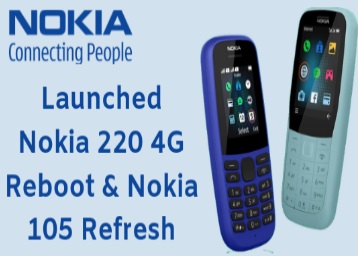 Nokia 220 with a 4G support and Nokia 105 reboot is official now. On Wednesday, HMD Global announced the two new feature phones. These two new phones will go on sale from next month.

The latest repetition of Nokia 105 sports a Polycarbonate body and there are three colour options available. The phone runs on Nokia Series 30+ operating system (OS). The Nokia 220 4G, on the other hand, sports a brand-new design but shares some specifications to the original Nokia 220.

The Nokia 105 branding released in 2014 with a 1.45-inch TFT screen and 128x128 pixels resolution along with Nokia Series 30 Operating System, and 800 mAh battery that lasted for 35 days on standby. The Nokia 105 is a similar name for Nokia enthusiasts.

The first Reboot of Nokia 105 came in 2017 when HMD Global re-introduced the Nokia 105 with a fresh design and several other tweaks. The latest version is the fourth-generation of the phone.

Whereas Nokia 220 was earlier launched in 2014, and the latest Nokia 220 4G is its refresh.  As the name suggests that the new model brings 4G support, but there are many other changes as well.

Note: If you want to know more about Samsung Galaxy A80 For Pre-Booking click on the given link.

As per HMD Global, the Nokia 105 is set to price for Rs. 1,000 roughly. In August 2019 the feature phone will go on sale in Blue, Pink and Black colour variant. HMD Global has not yet revealed exactly which markets will be getting the phone first for sale.

Note: If you want to know more about Redmi K20 and Redmi K20 Pro click on the given link.

It will come up with a 2.4-inch QVGA Screen (120x160 Pixels) and will run on features OS.  Other specifications of the phone include Micro-USB 2.0 port, Nano-SIM card slot (dual-SIM support in select markets), 4G with 2G fallback, Bluetooth 4.2, and rear VGA camera. Additionally, you will get 1200mAh battery, FM radio, and a 3.5mm audio jack.

That is all about the latest Nokia feature phones, Nokia 220 4G and Nokia 105, which are going to be in your hands soon. The prices are also very reasonable for every person to buy.