Have you heard of google gold saving scheme? Google Pay Users can now buy, sell and store gold using the payment app. For more details read the article below. 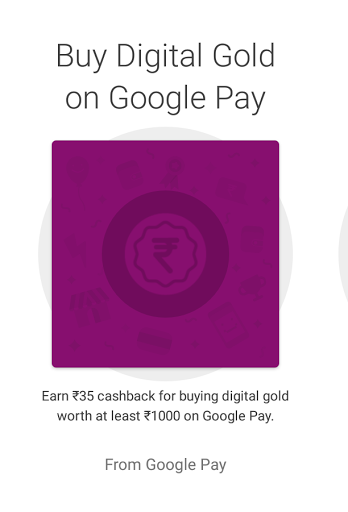 Google the internet biggie is following the steps of Phonepay and Paytm to provide users option to buy gold online. You can now buy and sell gold using Google Pay as Google launched its gold saving scheme in partnership with MMTC-PAMP.

India is the second largest consumer of gold as gold has always been a part of Indian history and culture. The gold buy and sell feature is added taking into consideration how auspicious gold is to Indians, stated the company.

Gold is purchased on different occasions like Akshay Tritiya, Diwali, Dhanteras and more by Indians. So, just before the upcoming Akshay Tritiya occasion Google Pay added the buy and sell feature marking its entry to the Wealth Management Services.

Google Pay is popular for its amazing cashback offers. You can get cashback with Google Pay Recharge offer.

Google Pay evolved as a payment app in a year. First Tez a payment app was launched in 2017 which a year later in 2018 got renamed as Google Pay. Since then Google pay is making a mark with P2P payments and peer to merchant payment.

Google partnered up MMTC-PAMP, which is a joint venture between the metals trading company owned by the states called MMTC, and PAMP the Swiss refiner of precious metals.

The gold accounts will be handled by MMTC-PAMP they will be entirely responsible for selling, delivery, and repurchase of gold and for providing services like price related information on Google Pay. Any kind of gold transactions will happen between MMTC-PAMP and the users of Google pay. 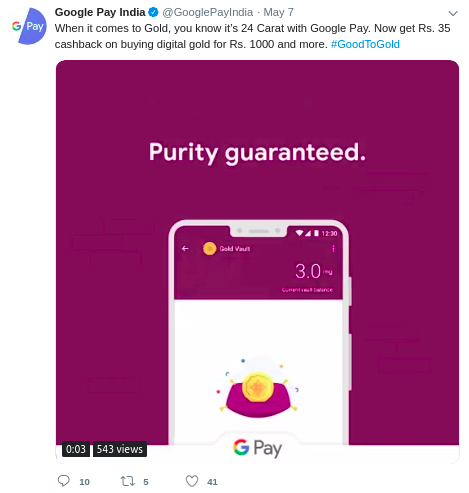 Google pay has now become more useful as you can buy store and sell gold securely using the payment app. Just before the auspicious occasion of Akshay Tritiya Google added buy and sell feature to its payment application in collaboration with country’s only LBMA accredited gold refinery, MMTC-PAMP.

Google Pay user can now buy 99.99% 24 karat gold, easily with the application. The purchased gold is stocked in the vaults by MMTC-PAMP,  on behalf of the user. The user can sell the gold at any time at the latest price.

The application is refreshed every few minutes to make sure it displays the latest running price of Gold.

Google pay gold account will let you buy sell and store your gold securely. It is the next big step by the tech giant to provide users with a much better payment application. We hope you benefit from the newly added feature to the Google Pay. Thank you for reading until the end.