How to Watch November Story Web Series For Free? 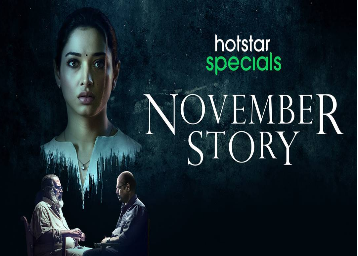 November Story is an upcoming web series on Disney+ Hotstar. Directed by Ram Subramaniam, November story features Tamannaah Bhatia in the lead role. The rivetting murder mystery will stream in Tamil, Telugu, and Hindi. For Tamannaah Bhatia, this is her 2nd digital release after Telugu crime-thriller series 11th hour.

November Story starts streaming on 20th May. You can watch the November Story web series for free as well, for more details scroll down ...

Meanwhile, Out of Love season 2 is also streaming on the platform, for more details click here November Story is a seven-episode murder mystery starring Tamannaah Bhatia. The web series revolves around a daughter's struggle to prove the innocence of her father who is found in an abandoned house with a dead body. With all evidence against her father, Tamannaah has to get to the bottom of the murder mystery to prove his innocence.

Tamannaah portrays the role of Anuradha a young, independent, and fearless girl who is on the mission to save her father. In the quest to find the truth many hidden secrets will be revealed.

The original Tamil series will also stream in Hindi and Telugu. You can watch the November Story web series on Hotstar in a language of your choice.

You can also get Disney+ Hotstar VIP subscription free with select recharge plans to watch the web series for free.

How to Watch November Story Web Series For Free?

Airtel, Jio, and Vodafone-Idea are providing free Disney+ Hotstar VIP subscription with select recharge plans. You can recharge with one of the plans to start your free subscription to the OTT platform and watch November Story web series free.

How to Download November Story Web Series for Free?

Airtel also has introduced plans for prepaid, postpaid, and broadband users to provide Disney+ Hotstar VIP membership. The benefit is also available for Vi users with select prepaid and postpaid plans. Meanwhile, Flipkart users can redeem Supercoins to get the membership for free.

With the pandemic disrupting the release of movies in theatres, there has been an increase in the demand for OTT platforms. Many movies have also released on the OTT platforms over the last year. Leading actors have also made their debut in web series in recent times.

What is the release date of November Story?

November story web series starring Tamannah Bhatia is all set to release on 20th May 2021. The murder mystery will stream in Hindi, Tamil, and Telugu languages.

Where Can I Watch the November Story web series Online?

November Story web series is set to release for a digital release. You can watch the web series online on Disney+ Hotstar.

Is Disney+ Hotstar free for Jio?

Jio users can recharge with select plans to get Disney+ Hotstar VIP membership for free.