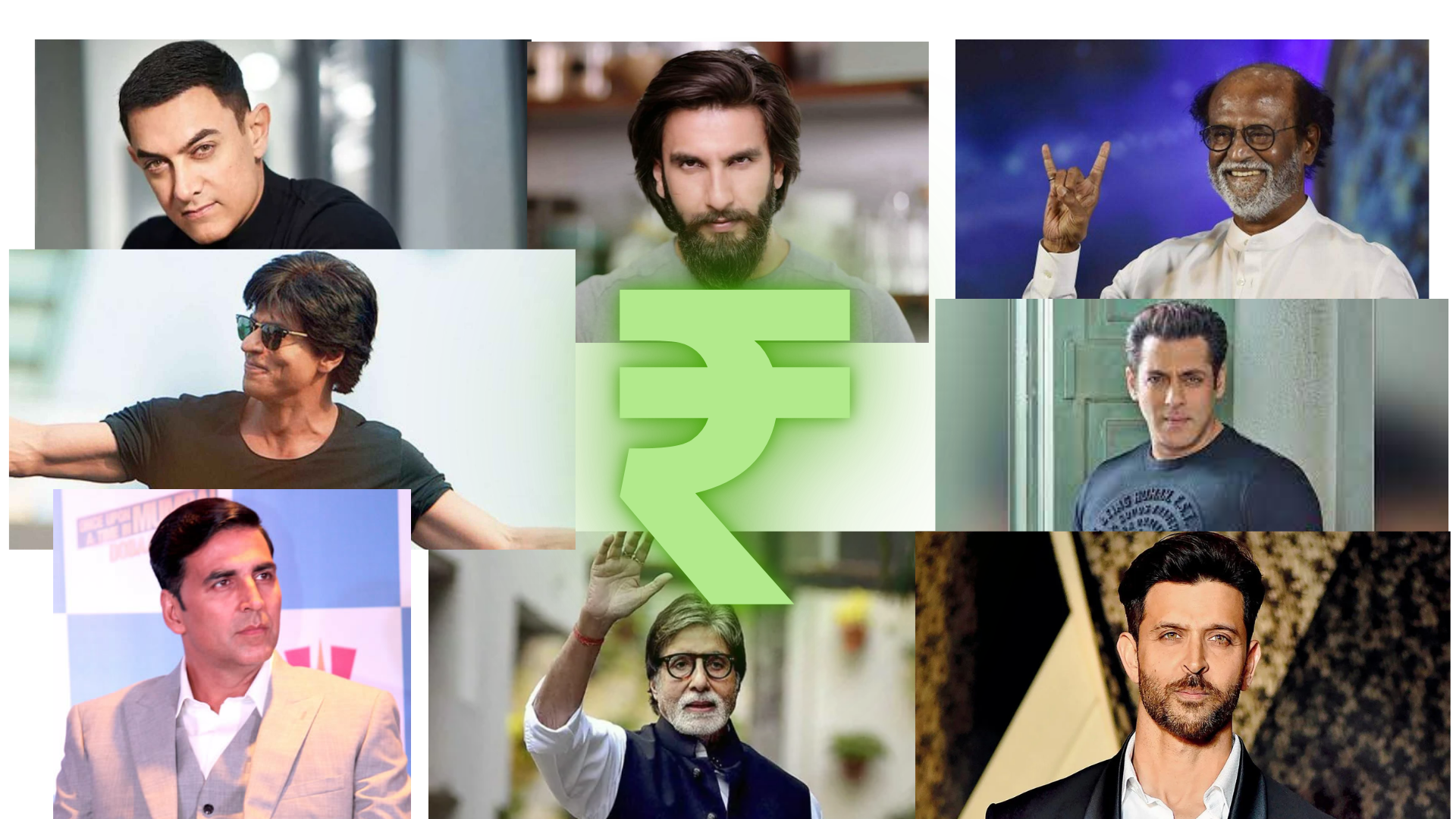 Money is what every human being wants. It is the dream of every person to be rich. When it comes to wealth, bollywood actors are among the richest persons in the country.

Apart from multi-crore remuneration for movies, the top actors earn from brand endorsements, their production houses, family business and more.

So here is the list of the richest actors in India and their net worth. Ranveer Singh is one of the most popular actors of the present era. The actor has surprised everyone with his choice of roles. The actor is also in the news for his unique style statement.

Apart from movies, Ranveer is also seen in many endorsements, which add to his income. The actor has a net worth of $44 million.

The actor has been featured in Forbes India's Celebrity 100 list since 2012. Ranbir Kapoor made his acting debut in 2007 with Sanjay Leela Bansali's Saawariya.  He endorses brands such as Pepsi, Flipkart, Lenovo, etc.

The actor has acted in several blockbuster movies such as Sanju, Yeh jawani hai deewani, Wake Up Sid, and Rockstar to name a few. Ranbir Kapoor has also won many awards over the years for his performances.. Ajay Devgan is rated among the top actors in the country. The actor first appeared in the super hit movie - Phool Aur Kaante in 1991. Ajay Devgan has appeared in 100+ movies. And he has aced every genre be it comedy, action, emotional or characters role.

Ajay Devgan has also been a producer and director of various projects. His net worth is around 30$ million. Devgn has won numerous awards - two National Film Awards and four Filmfare. He was honoured by the Government of India with the Padma Shri in 2016. Rajinikanth is the true superstar. With movies such as Baashha, Sivaji, Enthiran, 2.0 - the actor has earned 'god-like' status in Tamil Nadu. The actor has a net worth of $50 million. He has been honoured with Padma Bhushan and the Padma Vibhushan awards.

He was awarded the Dadasaheb Phalke Award at the 67th National Film Awards. Rajinikanth is regarded as one of the most popular actors in the history of Indian cinema. His unique dialogues and style statement make him popular among the masses. He has also been in the news because of philanthropy. Rated among the world’s most handsome men, Hrithik Roshan made his acting debut with the 2001 blockbuster Kaho Naa Pyaar Hai. Over the years, he has featured in blockbuster movies such as koi Mil Gaya, Krrish, Zindagi Na Milegi Dobara, Super 30, and Jodha Akbar among others. Saif Ali Khan, also known as the Nawab of Pataudi, is among the Richest actors in India. He started his career with the movie Parampara in 1993. He also runs a production company - Illuminati Films. The net worth of Saif Ali Khan is around $ 150 million.

In recent times, Saif Ali Khan has also featured in web series such as Sacred Games and Tandav. He also features in endorsement for popular brands such as Carlsberg, Lay’s, Amul Macho, etc. Popular as Mr. Perfectionist, Aamir Khan is also among the most paid actors in the Hindi film industry. He has an estimated net worth of $225 Million. Aamir made his debut with Qayamat se Qayamat Tak and has not looked back since then.

He became producer with period drama Lagaan, which was a massive success at the box office. Apart from movies, the actor is also seen endorsing brands such as Vivo, Snapdeal, PhonePe etc. Akshay Kumar is the busiest actor in Industry, with 4-5 releases every year. He is also the owner of Hari Om Entertainments. Since making his debut in 1991, he has acted in more than 135 films.

The endorsement deals with brands such as Policybazaar, Kajaria Tiles, Tata Motors, etc., also add to his net worth. He has won several awards, including Padma Shree (2009). With an estimated net worth of $ 325 million, Akshay Kumar is one of the richest actors in India. With an estimated net worth of $360 Million, Salman Khan is at 2nd position in our list of richest actors in India. The actor made his debut with Biwi Ho To Aisi, but he was first noticed as a lead actor in Maine Pyaar Kiya.

Besides acting in movies, he also runs a product house. Salman Khan also has many endorsements, including Thumbs Up, Revital, Dixy Scott, etc. He owns a trust, "Being Human," to help needy people and children. Khan started his career on TV but soon moved to the big screen with his debut movie Deewana. He has acted in 90+ movies with many hits and critically acclaimed movies to his name.

His company Red Chillies Entertainment has produced many successful movies over the years. Khan is also the co-owner of the IPL franchise Kolkata Knight Riders. Mannat is among the most popular celebrity houses in Mumbai. Some of his endorsement deals include Hyundai, Dish TV, Lux, and TAG Heuer.

So these are some of the richest actors in India. Apart from movies, Bollywood actors also earn a lot of money by brand endorsements. Most of the richest actors own production houses and also produce movies. Were you surprised to see any of the names on this list? Or do you think we have missed any actors? Do write in the comments below.

Answer. There are many rich actors in India. The richest actors list includes names such as Akshay Kumar, Salman Khan, Amitabh Bachan, and Aamir Khan, among others. But it is Shah Rukh Khan who tops the list with an estimated net worth of $ 600 million.

Answer. It is hard to tell who is the No. Actor in Bollywood. But there are several names that come to mind including veterans such as Amitabh Bachan, Aamir Khan, Shah Rukh Khan, and Ajay Devgan to name a few. The new generation of actors such as Ranbir Kapoor, Ranveer Singh, and Raj Kumar Rao have also made their presence felt in the industry.