How to Watch Radhe Movie Online? 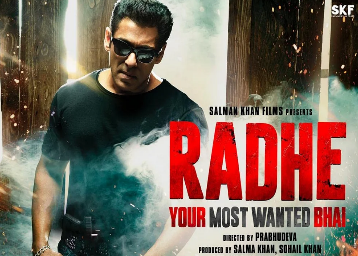 Salman Khan is back with another Eid Release. You can watch the movie online at your home. Radhe movie is streaming on Zee5Plex and Zee5. The streaming platform has also announced the Radhe combo offer to make your experience more pocket-friendly.

Directed by Prabhudeva, the movie is a perfect combination of action, catchy dialogues, and groovy music. The movie also stars Jackie Shroff, Randeep Hooda, and Disha Patani. For more details on how to watch Radhe Movie online for free scroll down.

Meanwhile, for the upcoming web series in India click here 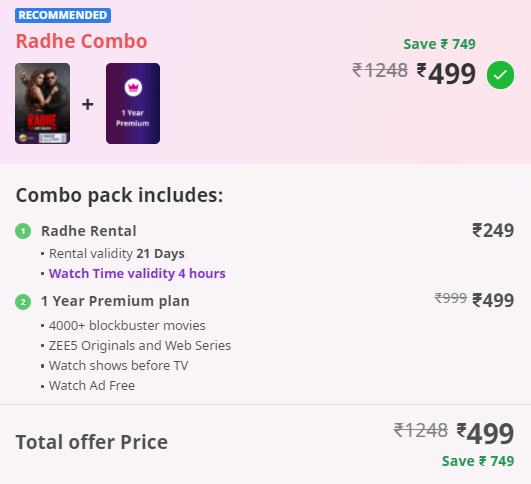 Zee5 has announced the Radhe combo offer. With the offer, viewers can watch Radhe movie starting May 13 and also get one year of access to Zee5.
Radhe: Your Most Wanted Bhai is the most awaited movie. The movie released on 13th May. It is available on Pay Per View Basis on Zee Plex. However, Zee5 has come up with a special offer to provide users access to  ZEE5 originals, movies, TV Shows, Live TV and much more for one year.
This pack is usually priced at Rs. 1248 but under the Radhe combo offer, users can subscribe at Rs. 499 only. Radhe movie will also be available for a one-time watch for Rs. 249 on Zee’s pay-per-view platform ZeePlex.
So you have two options to watch the biggest release of the year.

Radhe: Your Most Wanted Bhai The trailer of Radhe movie gives a glimpse into the cute chemistry between Salman Khan and Disha Patani. It is one of the highlights of the movie. The movie is also high on action sequences. Salman Khan will reunite with Jackie Shroff after Bharat.

This is also the third collaboration of the actor with Prabhudeva, the two have worked together in movies such as Wanted and Dabang 3. In the Radhe movie, Salman Khan will once again be seen in a cop avatar.

It is good news for all the Salman Khan fans as the release date much-anticipated movie Radhe has been announced. The movie will release in theatres and OTT platforms on 13th May 2021.

Radhe: Your Most Wanted Bhai was earlier scheduled to release on Eid last year. However, due to the coronavirus pandemic, the release date was delayed. After completing the shooting after restrictions were lifted, the makers have decided to release the film this year.

Salman Khan announced the news to his fans on Twitter. Radhe will also release on Zee5, the movie will be available on a pay-per-view basis via Zee Plex.

Earlier, this year, Salman Khan shared the news that Radhe will release on Eid this year.

The trailer of Radhe: Your Most Wanted Bhai has been released. Salman khan will be seen in a swanky avatar once again in this action movie. The movie directed by Prabhudeva also has Disha Patani, Jackie Shroff, and Randeep Hooda in pivotal roles.

Radhe's trailer has got mixed reactions from the public. Some fans are delighted to watch their favorite superstar on the screen, while others are complaining of repeating the same things again.

Due to the ongoing situation, the movie will get a multi-platform release. The film will release theatrically in over 40 countries and the movie will also release on Zee Plex.

You can watch Radhe movie on Zee Plex on a Pay-per-view basis. It is the first Hindi movie to follow the simultaneous release in theatres and on OTT platforms.

The movie is also expected to become available for all Zee5 users after some time.

How to Watch Radhe Movie Free?

Radhe movie will premiere on Zee Plex, which is a pay-per-view service. This movie will not be available on Zee5. So even if you have a Zee5 subscription, you have to pay for the movie to watch it.

If you want to watch the movie for free with your Zee5 subscription then you need to wait for some time.

ZeePlex does not allow movie download. Once you rent Radhe movie, you will have 21 days to watch it. After you start watching, you have 4 hours to watch the movie. This movie is expected to become available for Zee5 users later.
Once Radhe movie is available on Zee5, you can download the full on the app and watch it later in the offline mode.

How to Watch Radhe Movie at Home?

Note: Once you rent a movie, you will have 21 days to watch it. And after you start watching you have 4 hours to finish the movie.

Zee Studios is the theatrical distributor of the film. Radhe will release in theatres in all Indian states where theatres are operational. The movie will also arrive in West Asia, Singapore,  North America, Australia, New Zealand, Europe, and the UK.

The release date of Radhe is still a few days away so you can not book the tickets right now. Depending on the situation, tickets will be made available in select cities in India. Meanwhile, the movie is also set to release in theatres across 40 countries.

Once the ticket booking opens, we will update this post with movie ticket offers and cities in which you can watch Radhe movie in theatres. The movie will release in theatres and OTT on the same day.

Radhe: Your Most Wanted Bhai is all about Salman khan’s star-power, style, and swag. The movie is set in Mumbai. Salman Khan portrays the role of an encounter specialist cop.
Disha Patani adds glamour to the story. The movie is watchable in parts if you like action movies.

ZeePlex is a movie-on-demand service, which allows viewers to watch Blockbuster movies with their family from the comfort of home. Unlike the subscription-based Zee5, Zee Plex is a pay-per-view service. ZeePlex is available on leading direct-to-home (DTH) providers in India such as Tata Sky, Dish D2H, and Airtel Digital TV.

Radhe: Your Most Wanted Bhai is already listed on the platform. The audiences have been eagerly waiting for the film for more than one year. You can watch Salman Khan's Radhe On ZEEPlex For Rs 299. It is the expected price of streaming the movie. You will update the price after confirmation.

Radhe promises to be a perfect Eid gift for all the fans. The actor will once again be seen in a cop avatar. The movie will see a multi-format release. Salman Khan is keeping his tradition of Eid releases. Radhe will also be available on various DTH services, thereby giving the audience the choice to watch on any platform.

How to watch Radhe Movie Online?

Radhe Movie is all set to get a hybrid release. The movie will release in operational theatres and also premiere on Zee Plex. You can rent the movie on Zee Plex to watch with your friends and family at home.

Is Radhe Movie available on Zee5?

Redhe movie will premiere on Zee Plex. It is a pay-per-view service of Zee5. The movie will be made available for Zee5 subscribers later.

What is the release date Radhe movie?

Salman Khan starrer Radhe: Your Most Wanted Bhai is all set to release on 13th May. The movie will get a hybrid release. It will release in theatres as well as a premiere on Zee Plex.

Is ZeePlex free with Zee5 subscription?

No, Zee Plex movies are not part of Zee5 premium subscription. It is a pay-per-view service.