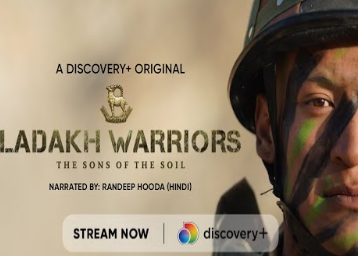 Ladakh Warriors: The Sons of the soil is an exciting film on Discovery Plus. Shot in the stunning backdrops of rugged desert mountains it gives an insight into the life of the Army's Ladakh Scouts and the gruelling training they go through. The discovery Plus original series is narrated by Randeep Hooda.

The show focuses on one of Indian Army's youngest infantry regiment, Snow Warriors. If you want to watch Ladakh Warriors online then keep reading ...

Meanwhile, Black Widows Web Series is all set to premiere on Zee5. To watch the crime drama series for free click here 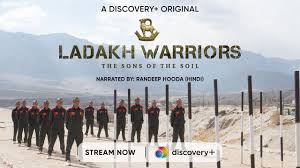 Ladakh Warriors: The Sons of the soil

Discovery+ is a leading real-life entertainment aggregator which was launched earlier this year. Recently, they announced new original shows for the India market

The exciting lineup of shows includes Mission Frontline featuring Rana Daggubati; Lakadh Warriors: The Sons of the Soil narrated by Randeep Hooda and Secrets of Snuali: Discovery of the century, directed by Neeraj Pandey and hosted by Manoj Bajpayee.

Ladakh is known for its stunning mountains which also make it one of the world's highest battlefield. Ladakh Warriors tells the story of the brave warriors and their relentless efforts to keep the nation safe.

Ladakh Warriors: The Sons of the Soil' premiered on 9th December 2020. While Mission Frontline and Secrets of Snuali are expected to be coming soon.

Discovery Plus Premium Price in India

Discovery+ is a value for money streaming platforms. The monthly membership costs Rs. 99 while the yearly subscription plan is priced at Rs. 299 only. There are also plenty of shows that you can enjoy for free. However, you need to be a paid subscriber to watch the premium shows.  For DIscovery Plus Premium offers click here

Recently, the streaming platform announced new original shows for Indian viewers. Discovery Plus has announced over 200 titles in Indian for 2021. Ladakh Warriors: The Sons of the Soil, is the first Discovery Plus original. The show narrated by Randeep Hooda premiered on December 9.

The second original series is ‘Secrets of Sinauli: Discovery of the Century’. This show is directed by Neeraj Pandey and hosted by Manoj Bajpayee. It focuses on the excavations of the Uttar Pradesh village Sinauli. another upcoming show on the streaming platform is Mission Frontline featuring Rana Daggubati.

Ladakh Warriors: Sons of the Soil is a visually spectacular show which focuses on Indian Army's Ladakh Scouts. The brave soldiers act as a human shield to protect the country. It tells the story of their bravery and sacrifice. You can watch Ladakh Warriors all episodes on Discovery Plus.

What is Discovery Plus?

Discovery plus is a real-life streaming service. The platfrom was launched in March 2020. You can watch TV shows, documentaries, and thousands of short videos.

Is Discovery Plus Paid?

The streaming service has free as well as paid content. To watch the premium shows you need a paid subscription.

What is the price of Discovery Plus in India?

Discovery plus is available in 1-month and 12-month subscription plans. The monthly plan costs Rs. 99 while the yearly subscription is priced at Rs. 299.

Currently, there is no download option available on Discovery Plus. The feature may be made available in the near future.