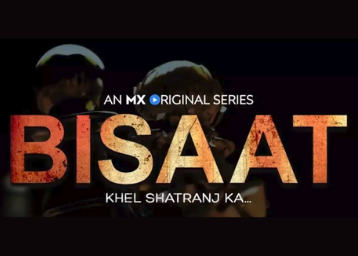 If you are waiting for a new Mx Player Original then we have good news for you! Bisaat Mx Player Original Series directed by Vikram Bhatt is coming in April 2021. Mx Player dropped the breathtaking teaser of this upcoming web series on their official Youtube Channel.

Bisaat khel shatranj ka on Mx Player is a crime thriller that will stream soon online on Mx Player App and Website. Who is the real criminal behind the murder? To find out how to watch all episodes of the Bisaat Web Series read the full article for the cast, release date, plot, trailer, and more. Bisaat is the latest Mx Player Original Bisaat starring Sandeepa Dhar, Omkar Kapoor, Khalid Siddiqui in lead roles is all set to release on 15 April 2021. This web series is going to release soon on Mx Player. The teaser and trailer for this upcoming series is out now and it is getting a great response on Mx Player YouTube Channel.

The trailer of the new Mx Player Original series Bisaat is released now. The date release of the Bisaat Web Series is disclosed with the trailer launch. You can watch the trailer of the Bisaat Web Series here now. It is an Mx Player Original directed by Vikram Bhatt. The teaser has got a great response on Youtube and Mx Player social media channels. The web series stars Sandeepa Dhar, Omkar Kapoor, Khalid Siddiqui, Jia Mustafa, Leena Jumani, Coral Bhamra, Ashmita Bakshi, Trishaan Maini and Tanvi Thakker.

How to watch Bisaat On Mx Player App?

If you haven’t used the Mx Player App before, then follow the simple steps mentioned below to watch the Bisaat web series online on Mx Player App.

Note - Are you Following FreeKaaMaal on Instagram? Catch up with us on Instagram for Special Offers, Deals, Discounts, Bumper Giveaways and Much More. Follow@freekaamaalofficial today!

Here we have listed some simple steps to help you download Bisaat episodes online for free.

Here we have the information about the whole cast and crew of Bisaat  Mx Player Original.

MX Player app is available in the Google Play Store. The app integrates all forms of entertainment. MX Player is an offline video player and also an online streaming platform. With MX Player, you get access to movies, tv shows, web series, music videos and more.

MX Player has a huge collection of originals that take complete care of your entertainment needs. Bisaat is one of the latest series available on MX player.

So, now you know how you can watch the Bisaat web series free online. So, what are you waiting for? Tune into Mx Player and start watching the Web Series today.

Q. Where can I watch Bisaat  Online for Free?

You can watch Bisaat online for free on  MX PLayer originals on your desktop or smartphone. It is available on both platforms for free. The app also allows users to download content and watch it later in offline mode.

Mx Player is a free app available on the Google Play store, You can download the app and watch all the content for free.

Q. How Can I Watch Mx Player Originals?

You can watch MX PLayer originals on your desktop or smartphone. It is available on both platforms for free. The app also allows users to download content and watch it later in offline mode.

Q. What is the subscription cost of Mx Player?

The app is absolutely free. You get free access to tv shows, movies, originals, web series, and more. There is no subscription cost for MX players at present. MX Player is popular for a huge collection of originals as well as tv shows and movies to take complete care of your entertainment needs.

Q. Which is the best series on MX Player?

Bisaat  Web series is the best you can watch on Mx Player. Bisaat is a psychological thriller drama. Bisaat is the latest upcoming web series on MX player.

Bisaat web series is releasing in April on Mx Player platform. All episodes of the series will be out on this date. MX Player has a huge collection of originals that take complete care of your entertainment needs. Bisaat is one of the latest series available on MX player.