Apple TV launched in India with services starting from Rs. 99 only. 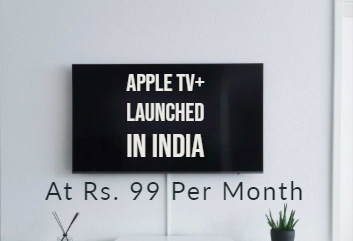 Apple launched Apple TV+ in India. The Apple TV services are accessible for all the iOS users from 1st November. Apple released its Apple TV+ services in more than 100 countries and regions.

Apple TV+ is a part of the Apple TV app that has been around for a while now. Apple has designed TV+ in a way, so it shows personalized recommendations for movies and TV shows to the users.

Apple Tv+ brings popular movies, Original TV Programs, Shows, and much more to all the users. There are no such worries for the Android users as the Apple TV+ services will also get available for some of the Android Smart TV users.

The Apple Tv+ offers the best shows across various kinds like Comedy, Horror, Drama, and many more to its users.

It should be noted that Android phone users will not be able to get access to Apple TV+. In the future, more Android smart TVs will get Apple TV+ support, the company has confirmed. Also, if you want to know more about Apple iPhone 11 Launched In India click on the link.

Customers who purchase the new iPhone, Apple TV, iPad, iPod touch, or Mac will get the Apple TV+ subscription for free for one year.

Through Family Sharing, up to six family members can share one Apple TV+ subscription. Post the free one year, and users will need to subscribe to the use of Apple TV+.

Where can you watch the Apple TV+?

Apple TV+ is now available on the Apple TV app on iPhone, Apple TV, iPad, iPod touch,and other platforms, including online at tv.apple.com. Apple had announced that the service would be available in 100 countries, including India. The service is currently active in the country, and the shows are available to stream.

Apple TV+ features new Apple originals every month. All ad-free and available on demand. And one subscription includes access for up to six family members at no additional cost. You can even watch the shows, Movies, and more offline by downloading it.

Get the subscription for the Apple Tv+ and enjoy the latest dramas and movies. Watch all the latest originals and movies in just Rs. 99 per month subscribe now and watch it either online or offline.

Q1. What does Apple TV+ include?

A1. Apple TV+ is Apple's new service that offers up originally-produced TV and movie content from Apple. The Apple Tv+ will have a lot of Original Shows, Movies, Drama, and much more all the iOs users.

Q2. How much is Apple TV plus per month?

A2. Apple Tv+ launched in India on 1st November 2019 with 7 days free subscription and then Rs. 99 per month subscription. The monthly subscription includes the family access to up to 6 family members.

A3. Apple Tv+ does not have a live tv but can watch the originals both online and offline and on-demand. The users can watch everything available in the app on iPhones, iPads, Macs, Apple TV, and also TVs from Samsung, LG, Sony, Vizio, Roku, and Amazon FireTV.

Q4. Do you need Apple TV for Apple TV Plus?

A4. The Apple Tv+ is not available on every mobile; it is available only in iPhones or iPads. So if you are a non-iOs user, then you have to stream to your mobile via apple web rather than the app.