The Best Places to Celebrate Dussehra In India

Dussehra festival is all about fasting, feasting, and fireworks. So, here is the list of 12 popular places of India to enjoy. 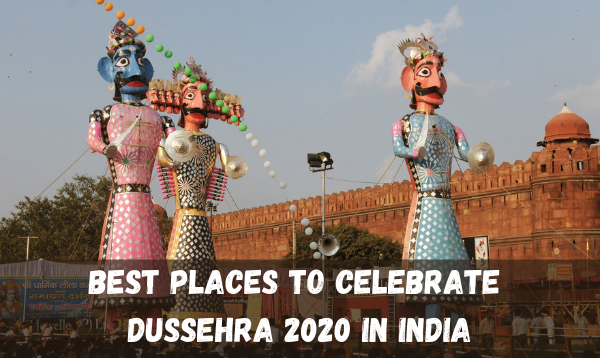 Dussehra is the 10-day festival and considered as one of the most distinguished festivals of Hindu culture. The festival is the representation of it depicts the victory of good over evil. The festival holds special and different significance for people belonging to the different parts of the country.

And, on the 10th day, the towering effigies of Ravana, Meghnath, and Kumbhkaran are set on fire. During the festival, there are several Dussehra Online Offers going on websites like Amazon, Flipkart, Snapdeal, Big Basket and more.

Navratri has started, and the entire country looks gorgeous in all those twinkling lights and decoration. Durga Pandals, Navratri venues, food stalls and fairs; you will see these in every nook and corner of the most portion of the country.

Dussehra, also commonly known as Vijayadashami, is one of the most comprehensive and the most celebrated celebrations of India. Dussehra is observed after the nine days of dancing and celebration of Navratri.

This festival is celebrated in the month of Ashwin as per the Hindu calendar, and that often comes in the months of September or October. Since it is also the origin of harvest time in India and Nepal, Dussehra is observed with much ceremony and devotedness.

The glorification of Dussehra certainly differs in each state and city. Listed below are some of the most reliable places in India that are ideal for Dussehra celebrations. Dussehra In India: Where And How The Celebrations Of 2020 here is the answer From Kolkata to Mysore, there are many areas in India that commemorate this festival with great passion and power. The cities don a distinctive look with brilliantly lit up places and the hustle-bustle of people.

Here we have mentioned the Most Famous Dussehra Festival Celebration In India where you can give a visit at least once in a lifetime for fun, dance, and much more. 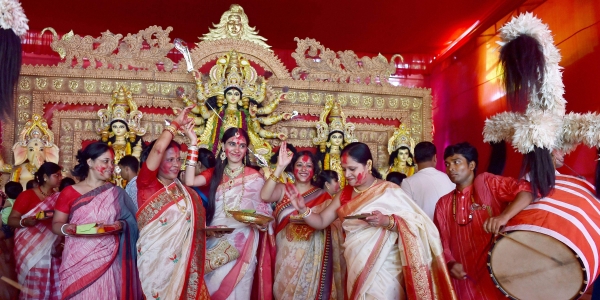 To begin with, the Dussehra Destinations That celebrate the Festival in India is the Kolkata, the biggest festival of West Bengal, Durga Puja literally transforms the Kolkata into the city of joy. Go on a pandal-hopping spree where we can see the numerous decorated sculpture(murti) of goddess Durga.

Take the blessings of Durga by indulging in delectable bhogs of famous Bengali sweets to doing the dance on the vehement beats of the dhaak.

Durga Puja in Kolkata is a once-in-a-lifetime experience. However, the celebrations culminate with the immersing of the Durga idols in the river.

This is probably one of the best spots all over India to observe Dussehra celebrations done on a great scale. Commonly known as Durga Puja, during this time, Kolkata can be seen in all her beauty. Durga Puja begins in a lot of hustle-bustle and vibrancy to the castle.

You will see women decked up in new, traditional costumes; all decked up attending different Durga pandals. As you drive down the streets of Kolkata, the colourfully LED lights, sacred music like Rabindra Sangeet is what you will be attended to.

You must visit Kolkata at least once in a lifetime during Dussehra to see the commitment and enthusiasm with which people marked his festival. 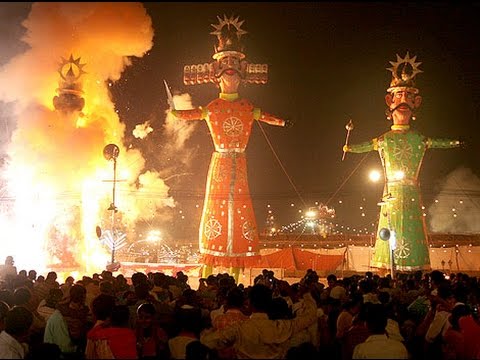 Best places to visit during Dussehra is Delhi accentuates a new avatar during Dussehra with hundreds of special stages set up for the Ram Lila musicals. Moreover, at various places of Delhi including Chitranjan park, Kashmiri gate etc., there was the establishment of pandals introducing effigies of Goddess Durga.

And, on the auspicious day of Dussehra, there will be an arrangement of sky-high effigies of Ravana, Meghnath, and Kumbhkaran. On the last day of Navaratri, they all set on fire.

Delhi, India's capital also takes in the wonderful festival of Dussehra in the most impressive way. Nine days of nonstop fun, dancing and demonstration, Delhi has its own different way of commemorating Dussehra. On the last day when people burn the dummy of Ravana, the roads are packed with the noise and flashes of fireworks.

Delhi is also Most Famous Places to Celebrate Festival of Dussehra for hosting some of the biggest Ramlila shows at the Ramlila Maidan and also at the Red Fort areas. The sight of overlooking Ravana dummies, Ramlila shows, fireworks, people decked up traditionally and also the various food stalls that sell delightful food makes for a precise idea for you to visit Delhi during Dussehra. 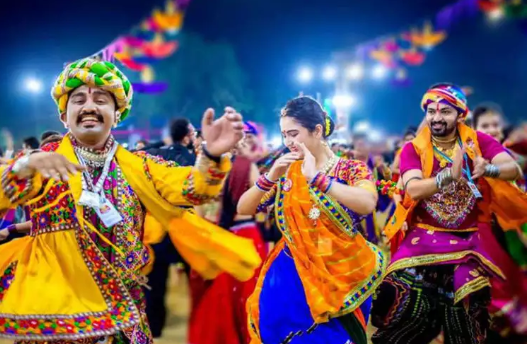 Best Places to Celebrate Navratri and Dussehra in India to join in for the some Garba and Dandiya dance while you savour the mouth-watering delicacies of Gujarat. All nine evenings begin with a Pooja for Goddess Durga and continue till the wee hours of mornings. 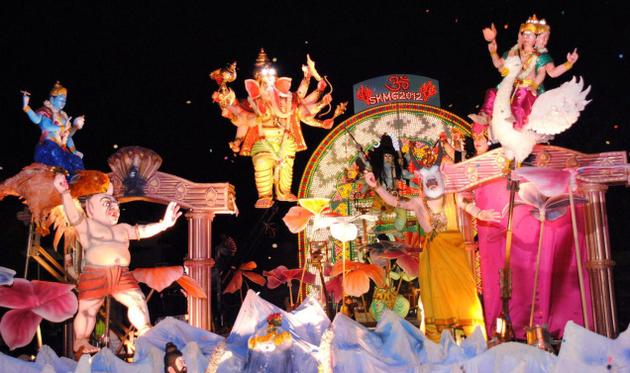 A bright, carnival-like festival observed amidst the peaceful hills of Coorg (Kodagu), Madikeri’s Dasara has a plentiful and interesting history that records back to the reign of Haaleri Kings. There are four temples devoted to Goddess Mariamma (after whom the festival is also called Mariamma festival), each holding its personal bizarre Karaga (a ritualistic folk dance devoted to Draupadi) that is conducted during the celebration.

There is nothing like jiving all evening to foot-thumping music in the cool hill air, with regular intermissions to taste spicy gobi Manchurian, pandi curry and of course Coorgi coffee.

However, the main Best Dussehra Festival Celebrations In India is the rowdy parade of 10 elaborately done up displays on which mechanical figures of gods, goddesses, demons and fairies perform dramas based on old-fashioned plot lines.

Spinning around the Mutharamman Temple (an extraordinary pilgrimage place in the region), the yearly celebration is a melting pot of music, dance, drama and an astounding collection of colourful clothes.

Another important feature of this celebration is a trance dance in which pioneers in fancy costumes influence to the pulsating beats of thara thappattam (amidst fire yielding clay pots in their hands) for hours on edge and far into the twilight. 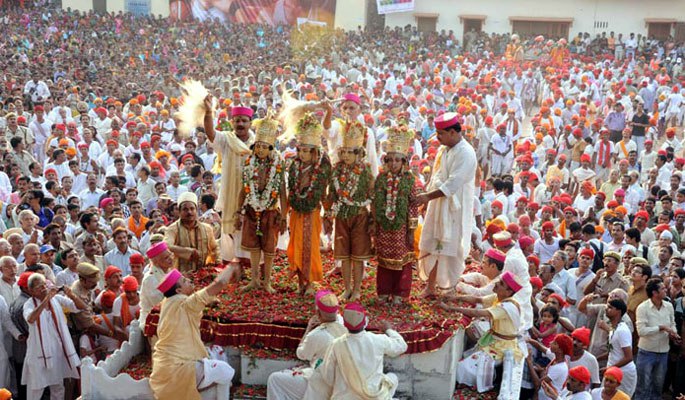 Head to Ramnagar, near Varanasi, to watch a 200-year-old tradition of the Ramayana on stage. Over month-long performances of various scenes of the Ramayana are held across the town.

The day of Dussehra marks Rama’s victory over Ravana as a tall effigy of the demon is set on fire in the middle of town. The performance of actors is incredibly matchless, as they hardly use mikes and loudspeakers, even when viewers number in the thousands.

Dussehra in Varanasi, one of the most religious places of India, is an adventure that you must have. Varanasi has the classic blend of Delhi like Ramlila shows and also Kolkata like Durga puja. One of the most traditional Ramlila show is kept at Ramnagar, that is about 15 km from Varanasi.

The idea of organizing Ramlila shows was received by the King of Kashi that goes on even today. This festival makes the whole city of Varanasi back to life with a happy feeling scattered all over. For ten long days, Varanasi continues a popular place to visit for devotees. 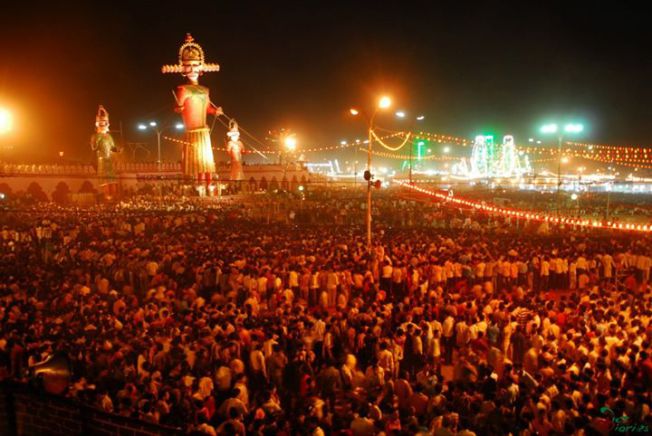 Kota celebrates with a fun-filled fair that includes cultural performances, fantastic displays of fireworks, costume plays, and the plethora of stalls serving delectable festive food. In this mela, artisans come from far and wide to sell their wares, and there are cultural programs and performances.

Towering statues of Ravana, Meghnath, and Kumbhkaran are burned, in the middle of the city. Additionally, there is a captivating procession from the Royal Palace to the fairground, featuring decorated elephants, camels, horses, and folk dancers.

Besides this, you can enjoy activities like windsurfing, water skiing, rock climbing, and rural excursions. 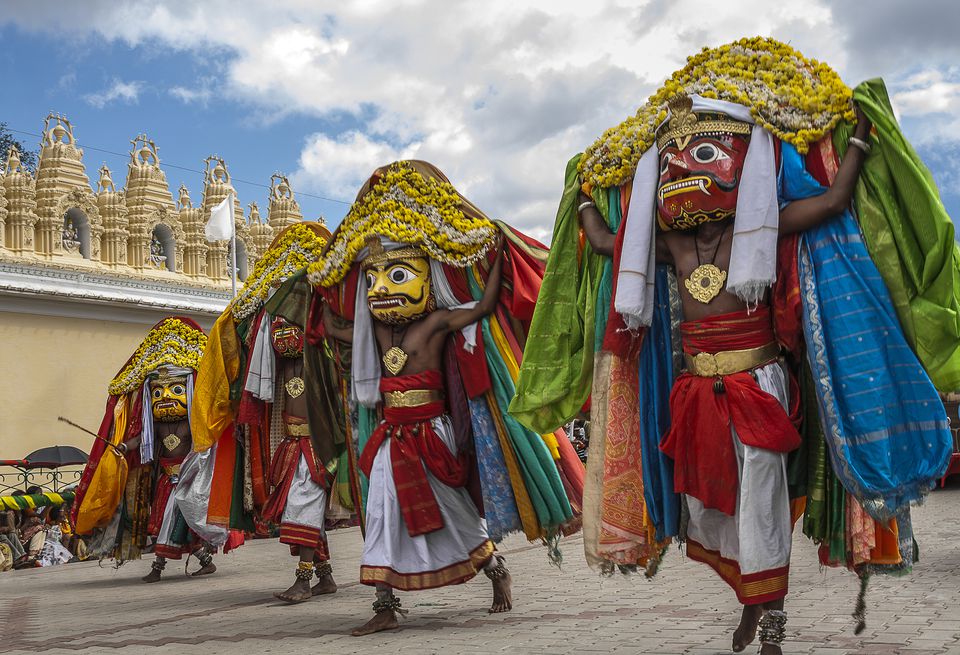 Mysore Dasara is the state festival of Karnataka, a 10 day festival with the last day being Vijayadashmi. The city of Mysore has a long tradition of celebrating the festival, attracting a large audience towards those festive vibes.

Other highlights of the event are the special Durbar at the spectacularly lit Mysuru palace. The majestic Dasara procession known as the Jumbo Safari is other aspects of this festive season.

The royals of Mysore have always been beginning at this festival in Mysore Palace. The complete palace is lit up for the propitious occasion. The castle is lit up for ten long days till the celebration is over. And what makes the festival worth seeing here is the grand parades that take place on the last day.

It is definitely a sight worth seeing. Elephants form a significant part of the festivities, and one of them brings the gold canopy of Chamudneshwaris idol. This idol is displayed from Mysore Palace and finishes at Bannimantap.

There are also stories about how Mysore got its name, and it said that the name was obtained from Mahishasura who was shot by Chamundeswari, a form of Durga. It is said that Mysore place is lit up with at least one lac enlightenment and each day over a core is spend on the arrangements and decorations. 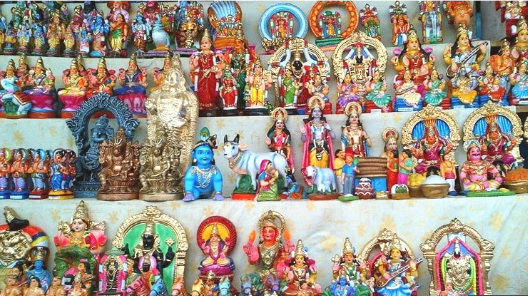 During the 10 days of Dussehra celebration, the streets of Chennai get decked up with the decorative items. The arrangement of effigies of gods and goddess on wooden stages is just matchless.

While the brightly-coloured tableaux usually represent the assembly of Goddess Durga during her battle with the demons. Moreover, the episodes of Ramlila are the main highlights of this celebration. 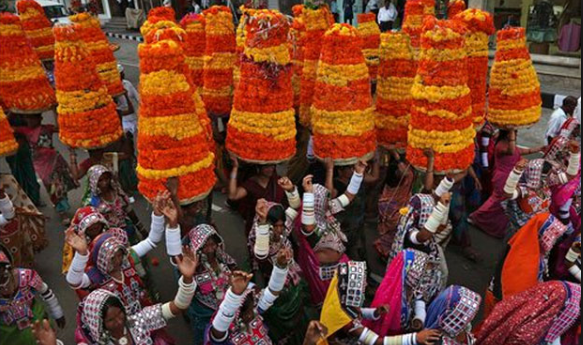 In Hyderabad’s Durga Puja celebration, you can find both colourfully decorated pandals and the displays of Ramayana episodes. The beautiful Maa Durga all decked up in fineries, are just so mesmerizing that it becomes hard to keep your eyes off.

It’s the time where women take out all of their ethnic dresses and jewellery and adorn themselves in the prettiest manner as possible.

The celebration of Durga Puja in Hyderabad starts with the worship of Lord Ganesha followed by women dancing around a flower arrangement. 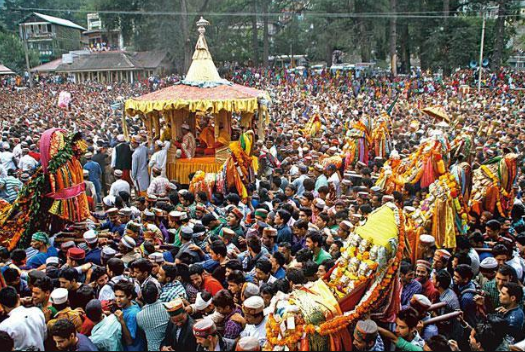 One of the main highlights of Kullu Dussehra celebration is instead of burning statues of Ravana, the celebration ends with the Lankadhan ceremony. Under which the burning of the Lanka basically made up of dry leaves, grass, and twigs on the banks of river Beas. 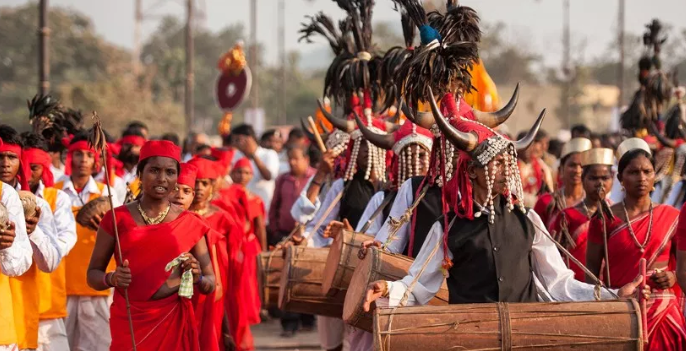 In Bastar, the celebration of Durga Puja is organized for 75-days. The celebration is all about nature, spirituality, and worship of Devi Danteshwari.

Distinctive rituals at this age-old tribal festival include Deri gadhai (posting of the pillars, Kalash sthapana), Kanchan gaddi (throne installation for Devi Kachan), Muria durbar (conference of tribal chieftains) and on the last day ohadi (farewell to the goddess).

The 10 days long festival of Dussehra brings peace and festivity and this festival is celebrated with much pomp at numerous fascinating locations of India.

However, every state of India has its own culture and flavour to celebrate this auspicious festival of Maa Durga. So, explore the above-given places and take the eternal blessings to lead a life filled with prosperity and happiness.

Q1. Where can I go for Dussehra?

A1. If you are planning to go somewhere this Dussehra 2020 then you must visit the places where Dussehra is celebrated in the gran way and the places are Mysore, Delhi, Hyderabad, Kolkata, and many more. These places are worth trying during the festive season.

Q2. Which place is famous for the Dussehra festival?

A2. There are many famous places for Dussehra festival some of which are Mysuru, Karnataka, Kolkata, Varanasi, Gujarat, and many more.