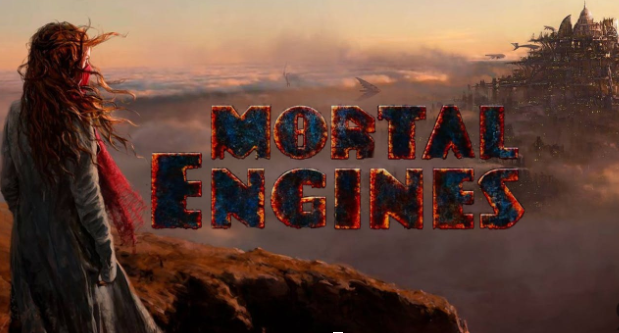 Mortal Engines is an upcoming flick by the producer Peter Jackson. The director & Producer Peter Jackson is mostly known for his work in Lord of the Rings Trilogy & The Hobbits Trilogy. Also, the star cast has some really great actors including my favorite Hugo Weaving. The man is known for his great work in the Matrix as Mr.Smith and as Vendetta in V for Vendetta. He can also be seen in the Lord of the Rings Series.

Mortal engines Story has been written by Philip Reeve who has a book by the same name. It is a movie for all the Steampunk fans out there. The movie is set in a Post-Apocalyptic world where the people had to turn to old technology which was steam based. The premise tells that a “Sixty Minute War” took which ended everything. Although, London has been saved by Nicholas Quirke who was a Nomadic Leader. He manages to put London on wheels and engines. After the calamity, everything from earthquakes to Volcanoes stopped although the technology of the moving cities became widespread. Now there are multiple cities some reside over the water, some on the Skies while the most dangerous ones on the ground moving. In this world, big cities devour small cities for resources while their inhabitants are killed Brutally. Also, the world is divided in three the traction cities which are the moving ones, the anti-traction that stops them from moving as they are depleting resources, and lastly, the static settlements that don’t move. It will be really great to see all this happening on screen and if you feel London is really big then wait till you see Manchester and Arkangel.

Note: In case if you wish to know about Robot 2.0 Movie Offers then click on the provided link.

Mortal Engines has been among the much-anticipated work by Peter Jackson. I mean this is some idea that anyone could hardly conceive. To see this imagination of watching all these cities move would be a treat in itself. Anyways, the movie Mortal Engines will be releasing this weekend on 7th December 2018.

The movie is based on the book written by Philip Reeve by the same name. The movie Mortal Engines had been made with a budget of 10 crores USD. Also, there will be furthermore parts that you will be able to see in the coming years. The movie is ready to get its theatrical release in Australia and New Zealand on December 6, 2018, although we will be capable of seeing it the next day which is a week before America.

If you are all set to catch the latest flick by Peter Jackson, Mortal Engines, then the movie will be releasing this coming Friday. Although, there are many great Mortal Engines Movie Ticket offers, discounts, Coupons, and promo codes that will be running on the movie. Therefore, if you wish to know about some of the best offers that are running on the movie then we have some of the best below.

Steps to Avail Paytm Offer on the movie Mortal Engines

The book by Philip Reeve is a four-part series where the movie is based on the first one. The book like the movie is based on a Post-Apocalyptic era where everything is steam based. A war broke between the world which ended everything in just Sixty Minutes. Although, London survived because it was set on engines and wheels by a Nomadic Leader Nicholas Quirl. In the present of the book where the story takes place, the world is a lot different. Now there are Traction cities that move and devour small cities as well as static settlements for resources. This concept of moving cities has been called “Municipal Darwinism”. The book Mortal Engines was published in 2001 and was shortlisted for Whitbread Award while it won in the Nestle Smarties Book Prize. It will be really great to see the book on screen as the concept itself is so fascinating.

So these some of the best Mortal Engines Movie Ticket Offers. In case if you wish to know about BookMyShow Coupon Codes then click on the link provided. We hope this article may have been of some help to you. Also, thank you for reading it until the end.