Activate Amazon Pay Later in less than 2 minutes and get instant credit on grocery, utility bills and more. 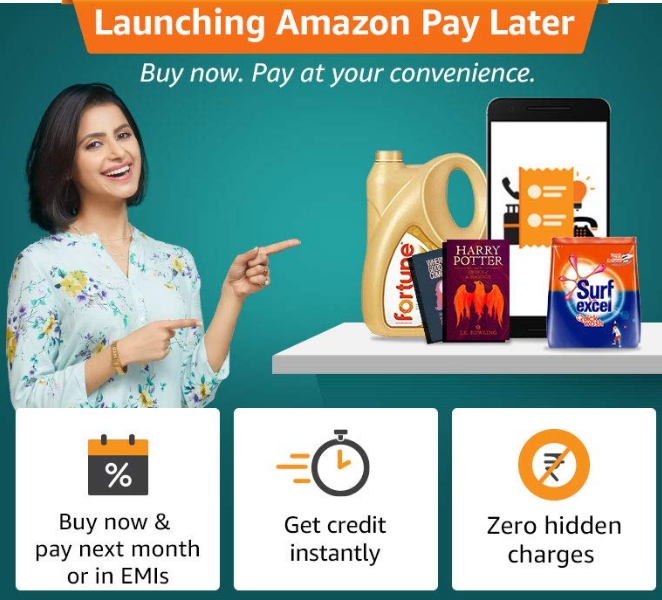 Amazon pay later is the credit service of the e-commerce giant. The service allows users to buy groceries, pay utility bills, and make other purchases. With Amazon Pay Later, customers get interest-free credit for a month. They can also choose the EMI service for up to 12 months.

Basically, the company has rebranded its Amazon Pay EMI service which was launched back in 2018. Amazon Pay later comes with some additional benefits customers can access credit even for groceries and utility bills.

Meanwhile, Amazon is all set to host multiple sale events in this month. For the best offers of Amazon Next Sale click here

What is Amazon Pay Later?

Amazon has introduced a new hassle way to get instant credit. You can activate Amazon Pay later online. Once activated the option will be available at the time of checkout. Customers can play later next month at no additional cost.

With Amazon Pay Later, EMI option is also available from 3 to 12 months. The service is also available for the purchase of daily essentials and payment of utility bills. Flipkart also has a similar service for instant credit of up to Rs. 5,000 at no additional cost for up to 40 days.

Are you looking for best online offers? Then go no further, Amazon is offering up to 90% off on with its upcoming sale. For more details on Amazon next sale dates and offers click here Amazon is providing flat Rs. 150 cashback via Pay Later account. The offer is applicable on new users sign up. The user has to complete one-time auto-repayment using Amazon Pay later to earn the cashback. Cashback will be credited within 3 days of the transaction. This offer is user-specific, and you check eligibility from the rewards section on the Amazon App.

Get 100% cashback on first recharge and bill payment of the month. The maximum cashback available with this offer is Rs. 35. User has to select Amazon Pay later as the preferred mode of payment. Minimum transaction for Amazon pay Later recharge offer is Rs. 1. The cashback will be credited within 3 days of your transaction.

Amazon has come up with a new offer for Prime Members. Now, Prime members get 2% cashback on payment with Amazon Pay Later.

If you are not a Prime member, you can subscribe to get unlimited cashback on your transactions. In addition to providing a flexible mode of paying next month, Amazon Pay Later is rewarding as well.
Amazon already has many exclusive discounts for Prime members, which include 5% cashback with Amazon Pay ICICI Credit Card.

How to activate Amazon Pay Later?

To complete the KYC, you need to provide basic details such as PAN and Aadhaar number. The KYC process takes less than 2 minutes. Amazon is also expected to roll out doorstep very soon for its instant credit service. If you want to activate the service now, you can easily start with the online process using PAN card and Aadhaar.

For repayment customers have two options. They can repay in the subsequent month without any additional fees. Or they can convert into monthly installments for up to 12 months.

With its new Pay later service, Amazon is providing instant credit service for the purchase of groceries, other essentials, and payment of utility bills. The feature is rolled out to specific users, you can check out eligibility for Amazon Pay Later on the latest version of the Amazon App.

How Do I activate Amazon Pay Later?

You need to variety identity using PAN and Aadhaar card. The KYC for Amazon Pay later is done by OTP based verification.

What is the maximum credit limit for Amazon Pay Later?

Customers can unlock a maximum credit limit of up to Rs. 60,000 with Amazon Pay Later.

Is EMI available for Pay Later on Amazon?

EMI service is available from 3 to 12 months for Amazon Pay Later.

I registered but never received the cashback of 100/- Upon further enquiry, the customer service said that you have to buy using amazon pay later first to get the cashback